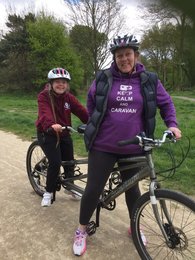 Willow and her parents, Matt and Chrissy, collected our Surrey based Viking Saratoga in late April 2017.  Chrissy reported that their first tandem ride, "was a super success".  Watch them in action here. 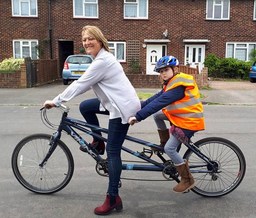 Kayleigh's Mum, Karen, collected our Surrey based Viking Salerno tandem in April 2017.  Here is Kayleigh with her Auntie. 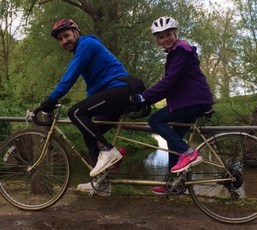 Macey, her parents and brother collected our Dursley based Claud Butler tandem at the very end of April 2017.  They are going to ride it along the River Wye.  Her Mum wrote, "Thank you so much for lending your bike: we had lots of fun yesterday. We didn't venture out to Monmouth, glad we didn't really as it was slightly challenging for Jamie, We are working up to a big trip out. Had lots of fun though and so grateful: it's a brilliant opportunity to have a go. Macey loved it." 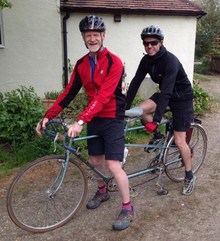 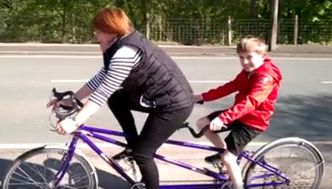 Max and his Mum, Sally, collected our Lancashire based Thorn Kiddyback tandem in late April 2017.  There is a video of them in action on our Facebook site. 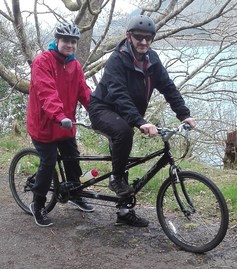 Keir's Dad, Colin, collected one of our Edinburgh based Viking Valhallas in late April 2017.  A few days later Colin wrote, "We went on our first ride today on the tandem alongside Loch Lomond and and had a great day out." 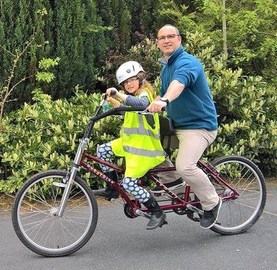 Lauren and her Dad, Brian, collected our Shropshire based Buddy Bike in late April 2017.  Brian wrote on our Facebook site that "She loves it and has been out every day so far." and "It gives better 'eyes on' for your little one and let's you constantly reassure and talk them through the ride. It makes the steering more unstable, but nothing too difficult" 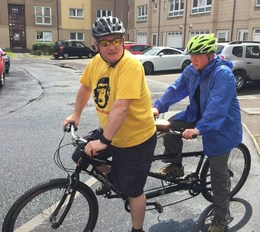 Michael collected one of our Edinburgh based Viking Valhallas in late April 2017. 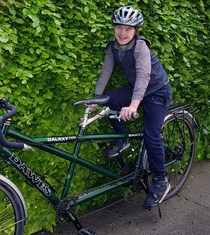 Daniel's Mum, Tricia, collected our Lancashire based Dawes Galaxy Twin in late April 2017.  Tricia said, "Daniel took to it straight away and wants to go out on it at every opportunity. Before getting it I was concerned he might decide to jump off when we stopped but so far the only problem is in convincing him to stop pedalling. Daniel loves it and did 10 miles last Saturday as well as a lot of shorter trips on other days." 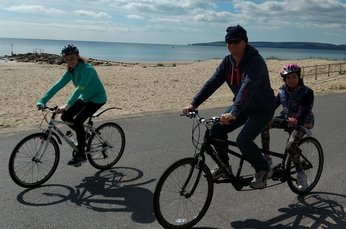 Saskia and her Dad, Nigel, and big sister, Ashi, have been enjoying one of our Surrey based Viking tandems. Nigel and Ilana are our Surrey Helpers. Ilana said that this was "on family ride down in Poole. Was really fab" and that it was "lovely to head out on the bikes as a family". 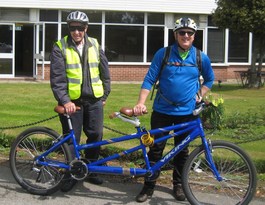 David and his friend, Richard, collected our Suffolk based Viking Regency tandem near the end of April.  Richard wrote in May, "David is 74 years old lost most of his sight 3 years ago and he hasn’t been on a bike for over 10 years, whereas Richard is slightly younger, can see well [unless reading, when glasses are then needed] and is a keen cyclist. However, neither of us had been on a tandem before.

We were both up for this epic challenge and with David suitable kitted out and given his clear instructions for being the stoker we settled into the saddles, we synchronized our push off and set to work peddling …. Amazingly we didn’t fall off but instead headed in a forward direction and before too long we hit a steady pace. The weather was glorious and riding along Suffolk country lanes, we took in the sounds and smells that can only be enjoyed when on two wheels.

We refueled on a hearty brunch and before too long were heading back to David’s house. Along the way we chatted about the history of the Suffolk villages David has known since being a young boy, but most of all…. we chatted about planning our next big ride out.
As Wallace would say …. A cracking day out Grommit …. And all thanks to Charlotte's Tandems ….. now opening a whole new world for David." 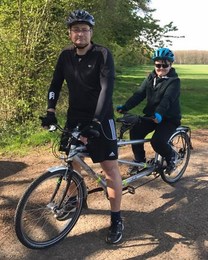 Samuel and his Dad, Paul, collected our Oxford based Orbit Unicorn in mid-April 2017.  His Mum, Alwena, wrote on our Facebook site, "The inaugural ride was a great success, giving Samuel freedom from his wheelchair, something that he hasn't had since his injury in Oct '15! Thank you!"

Albert from Bradford on Avon 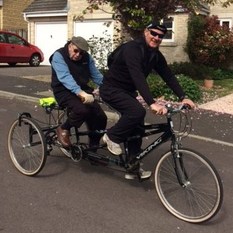 Albert and his son, Simon, collected the Trike conversion of a Viking Saratoga tandem in mid-April 2017.  Simon reported a fortnight later, "Have been out on maiden cycle ride...little bit scary at times...photos to follow asap."  and on our Facebook site wrote that Albert, "was a fabulous cyclist into his late 50's. Now with Parkinson's disease at 78 years, he still makes a great stoker. Just as an indication, Albert used to race from Newcastle upon Tyne to Carlisle and back, some 135 miles, in under 9 hours with no mobile phone! Thanks for the generous loan of the tandem trike."

Georgie from the North-East

Georgie and Eileen have our North-East based Viking Pennine Trail, though Georgie won't ride it. 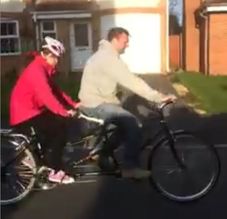 Hannah and her parents collected our Lancashire Viking Derwent tandem in early April 2017.  David, our Lancs Helper wrote, "She was screaming at first but Mum and Dad encouraged her whilst I took her for a very slow ride; within 10 minutes she was pedaling and enjoying it, chatting away on the back."  Her Mum added a video on our Facebook site and wrote, "Hannah's first try at cycling. Only around our street with her dad but it's a great start. Poor Dad was in from work and out on bike immediately. Few shouts/screams at times but after 3 times around the block/street, she seemed more settled. Onwards and upwards! Thanks again!" 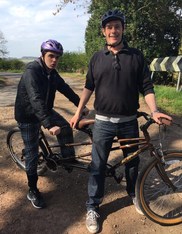 Ollie's Mum, Kirsty collected our Edinburgh based Viking Pennine Trail in early April 2017.  Here he is with his Dad enjoying a Bank Holiday ride.  More photos can be found on our Facebook site and see his sister, India, below. 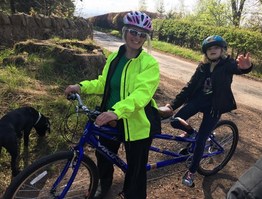 India and her Mum, Kirsty, collected our brand new Edinburgh based Viking Regency tandem in early April 2017.  Kirtsy said that "This is what Bank Holiday Mondays are all about. Took us a while to get confident enough to snap photos but we are off and running now" and "We had the best family fun day out today and couldn't have done it without this. Thank you." 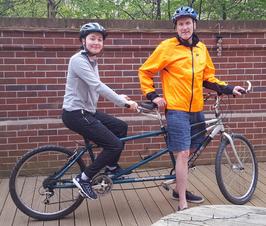 Naomi's Dad collected one of our Dursley based Dawes Discovery tandem in early April 2017.  Naomi reported later that as well as being out with her Dad, she has ridden with friends.  She added,  "Thank you so, so much for the tandem! It rides beautifully and is so much fun. I haven't been able to ride a bike out in the fresh air for over 17 years so this has been an amazing experience for me! "

Emelia and her family were the first Borrowers of our Shropshire based Weeho tag-along bike.  Unfortunately she didn't want to ride it. 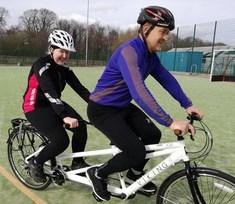 Natalie and Chris are the first Borrowers of our Edinburgh based Viking Arundel tandem.  They collected it in early April and this is the second tandem that they have borrowed from us.  They are going to ride it in a duathlon. 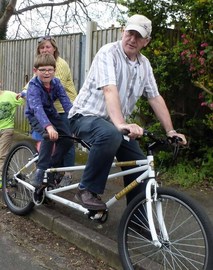 William and his family collected our Cheshire based Viking Companion at the start of April 2017.  Brian, our Helper there, wrote on our Facebook Group, "At last Spring is bringing along new Borrowers.....When asked who he wanted to ride on the front, he said, 'Brian'. It made my day."