Amelia and her Mum, Naomi, collected our Gloucestershire based black Thorn Kiddyback tandem in late September 2019.  See a video of them in action on our Facebook site.  Naomi said later, "Thank you, Charlotte's Tandems. We've had our first ride out now the rain has stopped …. and it was great fun! What a fantastic solution when too big for a tag-along but far too unsteady for a solo bike." 😃 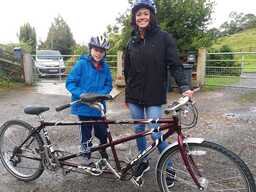 Alex and his Mum, Dani, collected our Gloucestershire based maroon KHS tandem in late September 2019.  See a video of them in action on our Facebook site.
Dani said later, "Braved the wind and rain and took our tandem out for the first time today: Stroud to Frampton. The whole time Alex kept saying, 'This is so great! I love this. I want to cycle around Britain someday!' And for me the first time I could go out with both my boys together in years!  Thank you!" 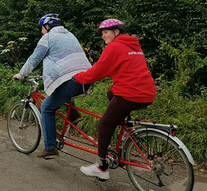 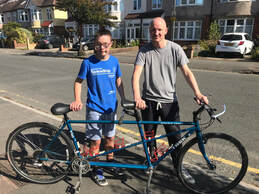 Daniel and his Dad, Graham, collected our London based Trek Double Track tandem in late September 2019.

Paige and her Mum, Angela, collected our Highlands based Viking tandem, Freya, in late September 2019   More details and a photo are to follow. 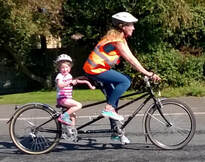 Bronte and her Mum, Caroline, collected our Sussex based Thorn Kiddyback tandem in mid-September 2019.  They are going to use it for the school run. 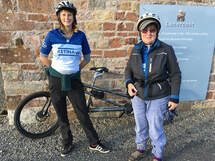 Emily from Retina collected one of our Oxford based silver tandems in mid-September 2019, so that Isabel, and her pilot, Maddy, could ride it in Retina's long distance ride in October.  here are Isabel and Maddy on their Hadrian's Cycleway ride. 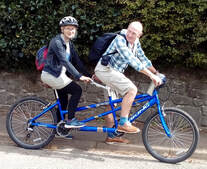 Wendy and Paddy collected our Devon based Viking Regency tandem in 2019. 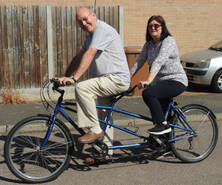 Ros and Michael have had our Hertfordshire based Sintra tandem since early September 2019. 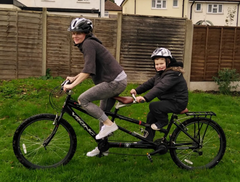 Fluer and Henry have had our Hertfordshire based Viking Valhalla tandem since late August 2019.  Fluer said at the end of October, "Thanks again for lending us the bike, Henry just had his birthday and we did lots of fun things but i know he was happiest when he was on the back of the tandem." 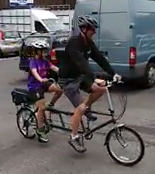 Narayan and his Dad, Michael, collected one of our Yorkshire based KHS Sausage Dog tandems in mid-August 2019.  They posted a video of their test ride on our Facebook site and said, "Huge thanks to Ruth and Jamie at JD Tandems and all the Team at Charlotte's Tandems for getting my son cycling again. The smile says it all!"

Anthony has had our Cheshire based Orbit Velocity tandem since mid-August 2019.  They rode 36 miles on their third trip out.

Rishi's Dad collected our Gloucestershire based blue Dawes Discovery tandem in mid-August 2019.  See a video of them in action on our Facebook site.  Rishi went to LA in the Summer holidays but the favourite thing he did in the holidays was ride the tandem.

Alan and his Mum, Laura, collected our Glasgow based Ammaco tag-along bike in mid-August 2019.  More details and a photo are to follow.

Richard and his parents collected our Lancashire based tandem trike in early August 2019.  Here he is in a still during their practise ride in July.  See the video on our Facebook group.

Faye and her Mum, Marie, collected our Berkshire based Duet Wheelchair tandem at the start of August 2019.  Unfortunately Faye found it too hard to ride.