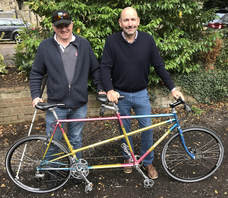 Paul and his cycling/running friend Ian, have had our London based Trek tandem since the summer of 2017.  At the end of October, Ian reported that they "have bought a tandem and have started training for a John O’Groats - Lands End event, in aid of Kent Association for the Blind in a couple of years time." Here they are pictured with that tandem. 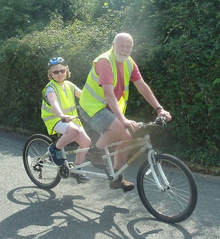 Precious and her Dad, Andrew, collected one of our Sussex based Viking Companion tandems in late-August 2017.  Her Mum, Roselle, said in mid-October, "She is loving the tandem and we are getting out at least once a week." 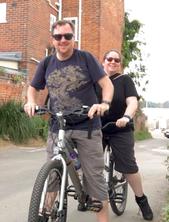 Mandy and Rob borrowed our Suffolk based Ammaco tandem in late-August 2017 to go camping in Suffolk.  They have written, "It was a great experience for Mandy (and for me too)! " 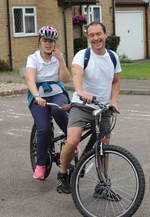 Rosie and her Dad, Pete, collected our Hertfordshire based Viking Valhalla tandem in mid-August 2017.  They were one of our first ever Borrowers, previously borrowing our Essex based Hiway tandem in February 2012.  Here they are this time. 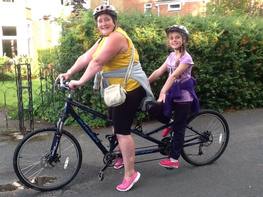 Bella and her Mum, Gemma, collected our Dursley based Schwinn Sierra tandem in mid-August 2017.  They borrowed a tag-along bike from us in 2013. 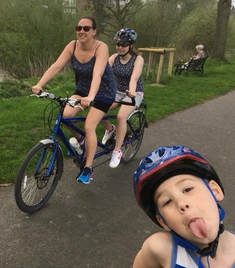 Lydia's Dad, Tom, collected one of our Dursley based Dawes Discovery tandems in mid-August 2017.  They had it previously this year and brought it back this summer, for someone else to borrow, but they vanished, so Lydia now has it back again.  Here she is with her Mum, in April 2018, cycling around Pitchcroft in Worcester, with little brother doing what little brothers do best! 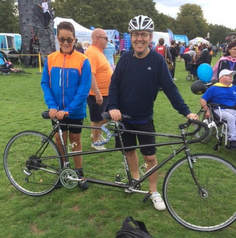 Ryley's Mum, Julie, collected one of our Surrey based Dawes Galaxy tandems in mid-August 2017.  She wrote a couple of days later, after taking part in the Superhero Triathlon, "Please find enclosed a few pics from today's event.  Ry and Tony (the pilot) had really wonderful time." 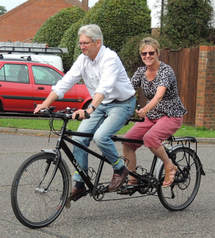 Christine and husband, Ralph, collected our Hertfordshire based Orbit Routier Tour tandem in mid-August 2017.  They are its first Borrowers.

Red borrowed our Isle of Wight based Cannondale tandem in early August 2017, for the second time, to ride with his family on holiday.  He said, "We had a brilliant time and will be back again next year. It really was a highlight of our holiday."  Later he sadi, "My apologies for not posting a photo - my wife did take a some and and then promptly dropped her phone in the sea when we went kayaking a few days later, so they and the phone are no more I’m afraid." 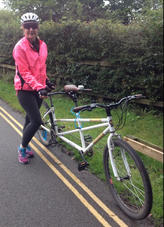 Emily collected one of our Cheshire based tandems in early August 2017.  "Sorry for the delay. I've managed to get out on the bike a few times with my friend and neighbour Ian. On Bank Holiday Monday we took the bike out along the Wirral Way from Hoylake to Park Gate."  "It is a wonderful incredible experience to get out on a bike...I am very grateful to Charlotte's Tandems for lending this to me - thank you!"

Heidi from the Wirral 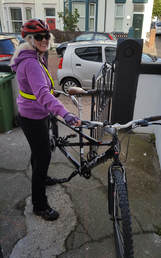 Heidi collected our Cheshire based Viking Valhalla tandem at the start of August 2017 to train in a triathlon.  At the start of November she wrote, "I have really enjoyed having the tandem and have discovered the freedom and exhilaration of cycling. Every time I go out on the bike I am grinning like a Cheshire cat from the minute I get on, till the minute I get off. Completing a triathlon at the end of last month was by no means the end of my cycling journey." 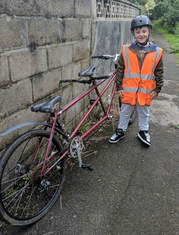 Brody and his Mum, Leanne, collected our Devon based Dawes tandem in early August 2017. She wrote in mid-August, "It's fab we have been out a few times now in short bursts, as Brody struggles with coordination still, but each time he's getting better and better" and in early September added, "Thank you so much for this opportunity; it means so much to our family."