Ryan and his Carer, Ian, collected our Bath based Sun tandem at the end of August 2015.  More details and photo are to follow.

Dylan's Dad, Si, collected our Gloucestershire based Viking Saratoga tandem in late August 2015.  Unfortunately Dylan wouldn't even get on the tandem, despite his family trying lots of times to persuade him.  They returned it in mid-Septmeber 2015. 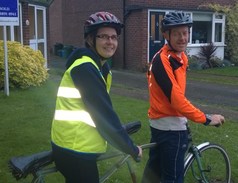 Julie and Chris collected our London based Wakefield tandem in late August 2015.  Chris wrote in mid-September, "Here's a quick update... we have had one very brief outing so far -  it was good for me on the front but Julie found the experience on the back a little frightening - lack of control I think...  I didn't want to force anything and put her off so we put it away for that day...  I am hoping for a quieter weekend this weekend and have asked Julie can we try again..."
In mid-October he wrote, ""We tried again, it was a similar story with Julie being terrified on the back. She has however said she wants keep trying..." 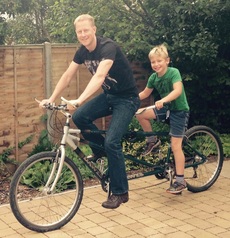 George's Dad, Andrew, collected one of our Gloucestershire based Dawes Discovery tandems in late August 2015. 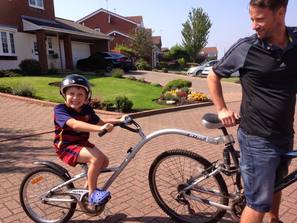 Jamie and his parents collected our North-East based Reflex tag-along bike in late August 2015.  His Mum, Jayne, said on our Facebook site that this was his first ride with his Dad. 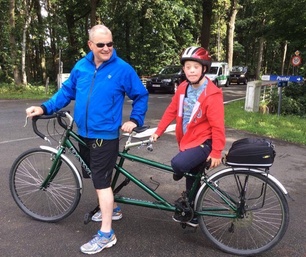 Daniel's Dad, Paul, collected our Lancashire based Dawes tandem in late August 2015.  They took it on holiday to Belgium and have a range a photos and a video on our Facebook Group. 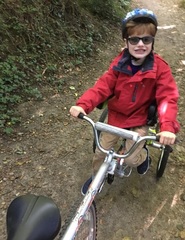 Leo and his parents have had our tag-along trike since mid-August 2015.  His Mum, Hannah, wrote in mid-September 2016, "Leo's been stuck indoors poorly so today we took a sunny bike ride, the fresh air was lovely!" 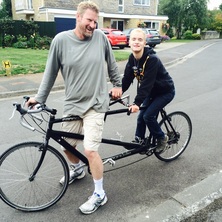 Jimmy from Eston, Redcar and Cleveland 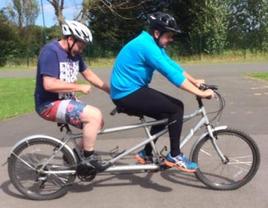 Jimmy and his son, Graeme, collected our North-East based Dawes Discovery tandem in mid-August 2015.  Helper Mike wrote on our Facebook site, "Graeme needs the saddle up, Jimmy can't. Because of his inability to use his right leg I have fitted shimano SPD pedals. He needs to hold the bike up with his left leg whilst the pilot puts his shoe into the clip. He could do with a set of BMX handle bars."  Mike added, that Jimmy had a stroke. Mike has been helping him them to balance and ride and says that Graeme is looking forward to taking his dad out. 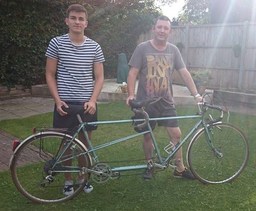 Dan and his Dad, Colin, collected our Suffolk based Claud Butler tandem in mid-August.  Colin said on our Facebook site, "Looking forward to Dan getting on the road with the tandem, thankfully loaned from Charlotte's Tandems. Getting Dan back on the road, after his sight loss, may even kick me into shape. Many thanks to all who helped." 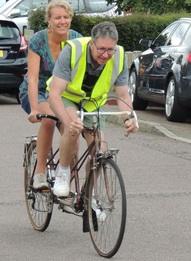 Our new Helper in Hertfordshire, Steve, lent out his first tandem in mid-August 2015. He said that, "Greg has Parkinson's and is the steerer!" and that it was "great to see Greg and his friend, Helen, go off with the Globetrotter." 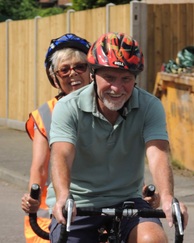 Helen and David borrowed our Hertfordsire based Dawes Kickback tandem for just two hours from our new Helper, Steve, in mid-August 2015.
David said, "Thanks a lot: it was a great experience. Helen has been buzzing ever since. Think the photo shows how we felt."
Steve has added, "it was great to see the joy of Helen and David (they may go off and buy one now they have got the confidence). Helen (who is quite small) gave me the biggest hug she could and said, "you've changed my life. You won't believe how many people are waiting to see how we get on." 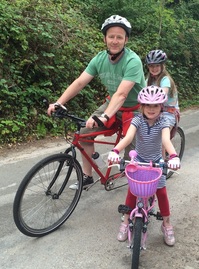 Jessica and her Dad, Paul, collected our Leicester based Orbit Gemini tandem in mid-August 2015.  They wrote at the start of September,
"My name is Jessica and I'm 9 years old and have LS Hemiplegia.
In August, my Dad collected a tandem from Peter in Leicester. It was so fun cycling from village to village stopping at pubs & parks on the route. We have also gone on bike rides with my little sister Maya. I've enjoyed the whole experience."
"Speaking as a very proud Dad, we have now the opportunity to enjoy great bike rides as a family.
A BIG thank you to Charlotte's Tandems for this great experience !!!" 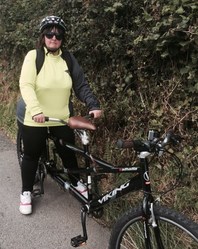 Claire and her husband, Mark, collected our Cheshire based Viking Valhalla tandem in mid-August 2015.  They say that they have enjoyed it so much that they'd probably buy their own tandem after they've returned our tandem. 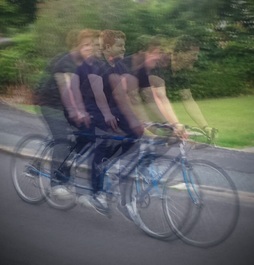 Sam, his Mum, Steph, and Carer, Dan, collected our Cheshire based Mercian tandem in mid-August 2015.  Brian says that they were "going so fast that they were a blur when they collected the ... tandem" 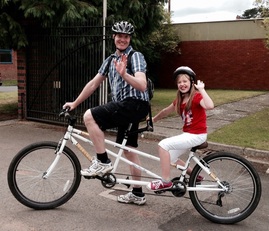 Olivia's Dad, Paul, collected our Shropshire based Viking Companion tandem in mid-August 2015.  Her Mum, Gill, wrote still after, "After a little bit of getting used to by both Dad and Olivia our first cycle ride on the tandem was enjoyed by all. We managed a 5 mile circuit along the river and around the racecourse, with of course drinks and cake at the cafe. I have attached a photograph of Dad and Olivia refreshed and ready to go". 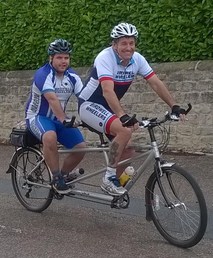 Paul and his Dad, John, collected our Yorkshire based Orbit Unicorn tandem in early 2015.  He said about the photo on our Facebook site, "Paul out last Sunday on a 28 mile ride via Oldcoates Cafe. Good sunny day with Dave, on his solo bike, dropping us on the inclines: we got our own back downhill" 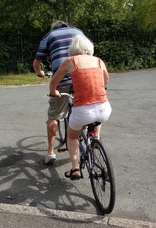 Susan and her husband, Mike, collected our Surrey based Viking Salerno in early August 2015.  They plan to send a better photo after their trip to the Olympic Park.

Dean and Fran borrowed our Yorkshire based Dawes Discovery tandem in early August 2015 for the Goalball UK Coast to Coast Ride, see ﻿here for more info﻿. 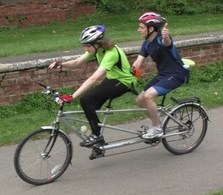 Anthony and Oliver borrowed our Yorkshire based Orbit tandem in early August 2015 for the Goalball UK Coast to Coast Ride, see here for more info.

Summer from near Chester 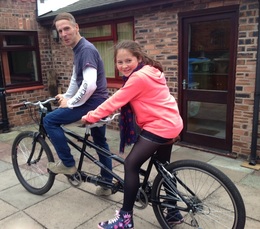 Summer and her family have borrowed one of our Cheshire based Viking tandems for the second time at the start of August 2015.  Her Mum wrote at the start of September, "She has thoroughly enjoyed using the Tandem. Thank you" 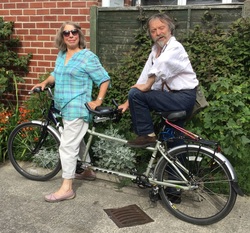 Chris and his partner, Mary, collected our Yorkshire based KHS tandem at the start of August 2015.  Mary wrote a few weeks later, "Just a line to let you know that we are getting on famously with the tandem. We have been on several long rides, as well as using it locally to go to the hospital and suchlike. Chris gets on very well with it . . . it is such good exercise for him, and is making a real difference to his equilibrium - psychological, as well as physical!"