Kathy from near Chester 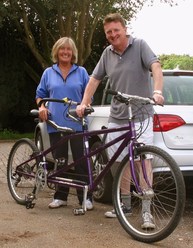 Kathy and her husband, Andy, collected our Cheshire based Burley Samba tandem in late August 2016. 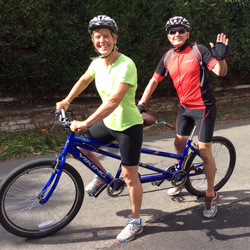 John and his wife, Linda, collected our Suffolk based Viking Regency at the end of August 2016. 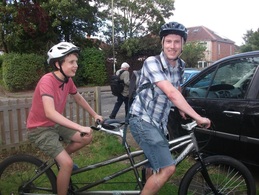 Oscar's Dad, Pete, collected our Dursley based Viking Saratoga in mid-August 2016.  Oscar & Pete have used the tandem to explore Oxfordshire, cycling to little villages like Islip. Oscar loves the opportunity to get some exercise in the fresh air. He loved cycling on a tag-along as a small child but this has been his first chance to cycle for about eight years. He enjoys the experience of the bike and having time to share with his Dad.

David from near Plymouth 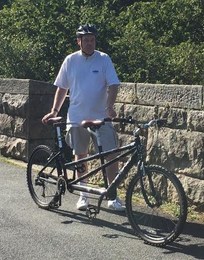 David collected our Plymouth based Viking Valhalla in mid-August 2016. Here he is in mid-September on the Plym Trail. 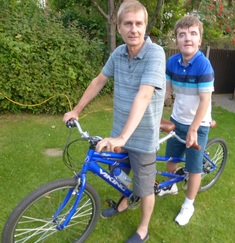 Matthew and his family are the first Borrowers of our Cheshire based Viking Regency tandem and collected it in mid-August 2016.  They have borrowed a tandem from us twice before.

Nichole and her Dad, Mike, collected our Plymouth based Dawes tandem in mid-August 2016. Mike reported in mid-September that they "managed to get out today for the first real try. Did about 3 miles, up and down. Nicole did really well, but need to practice and get the saddle heights better."

Niamh's Mum, Rachel, collected one of our Gloucestershire based Dawes Discovery tandems in mid-August 2016. Unfortunately Niamh was too small for it. It would have been better if she had attended when her Mum collected the tandem.

Dylan from the West Midlands

Max and his Mum, Samantha, collected our Suffolk based Allycat tag-along in mid-August 2016.  They did provide any comments or a photo.

Jill and Martin are the first Borrowers of our brand new Wiltshire based Viking Regency tandem. They collected it in mid-August 2016. Unfortunately they didn't ride it.

Sarah is the first Borrower of our newly donated Wiltshire based Dawes Galaxy tandem and collected it in mid-August 2016. They were so keen to borrow it that they volunteered to get it into a rideable state for us. More details and a photo are to follow.
Thomas from Shrewsbury 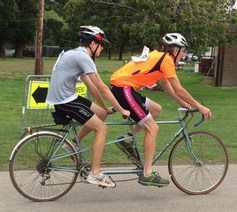 Thomas' Dad collected our West Midlands based Claud Butler tandem in early August 2016. Thanks to Ray for arranging it. Ray wrote on our Facebook site, "Here's Thomas with Dad, David, from Shropshire being able to take part in the Shrewsbury Sprint Triathlon thanks to hire of a CT Claud Butler (part of Nigel's fleet in Bromgsgrove). I've seen your very respectable results so well done both!"

Keelan and his Mum, Laura, collected our newly donated Gloucestershire based Trek tag-along at the start of August 2016.  Laura said, "Attached is a photo of myself and Keelan just setting off for a ride. He wasn't so sure at first and didn't understand how to pedal but now he's getting the hang of it and loves it. Thank you so much for this opportunity!"