Evie and her Dad, Darren, have our Shropshire based Viking Valhalla since late-February 2017.  This is the second time that they've had this tandem.  Darren wrote on our Facebook site, "About 3 miles into a 5.5 mile ride along Wombourne railway walk and Evie is still smiling and pedalling like mad!" 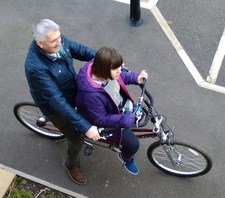 Elise and her Dad, Phil, collected our Shropshire based Buddybike in mid-February 2017.  Here they are outside their house.  He wrote, "She loves the bike (my thigh's don't!)" 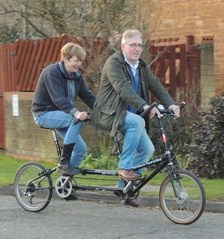 Sally and her husband, Toby, collected the Hertfordshire Bike Twosday tandem in mid-February 2017. They want to use it locally to their home but as it comes apart they may use it further affield.  Steve, our Hertfordshire Helper said, "They took to it very well."

Macy's Mum, Shelley, collected our Staffordshire based Dronfield tandem in early February 2017.  They are its first Borrowers.  More details and a photo are to follow. 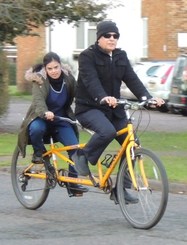 Farah and her parents have had our Hertfordshire based Dawes Toucan since early February 2017.  More details are to follow. 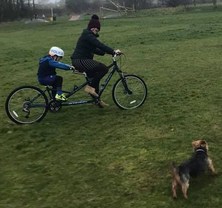 Jude's Dad, James, collected our Dursley based Schwinn Sierra tandem in early February 2017.  Jude's Mum, Jessica, wrote on our Facebook site, "We had a huge amount of fun today...the grass uphill was a challenge but still so much fun"

Cath and her sister, Ruth, collected our North-East based Dawes Galaxy tandem in early February 2017.  More details and a photo are to follow. 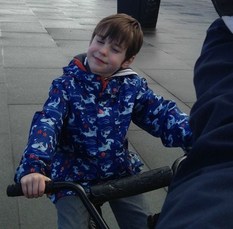 Joe's Mum, Colette, collected our Edinburgh based tag-along in late January 2017.  Colette wrote on our Facebook group, "First outing with tag along today. Joe seemed to quite enjoy it. Hopefully he will become more confident with each try!" 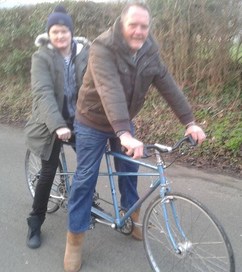 Nathan and his Dad collected one of our Dursley based Richmond tandems in mid-January 2017.  Nathan is going to ride it with his Personal Trainer in Triathlons.  He has been updating us on our Facebook group.
"Got out on our first tide today! Somewhere around 12 miles with no major issues asides from it being dark and cold!"
"Had a good 14 mile ride this morning! Starting to get used to the communication and getting a lot faster." 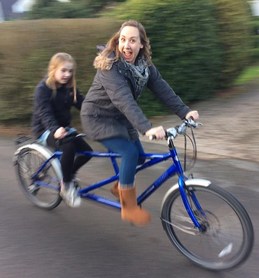 Lydia's Dad, Tom, collected one of our Dursley based Dawes Discovery tandems in mid-January 2017.  Her Mum, Hannah, said on our Facebook site, "We are loving using our tandem with our daughter! Thank you!" 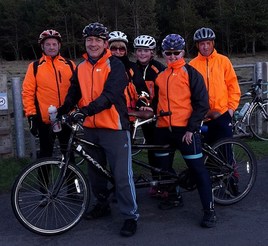 Natalie and her Pilot collected one of our Edinburgh based Viking Valhalla tandem in mid-January 2017.  She said on our Facebook site that this is her with her "cycle club doing a 20 mile run along the Ayrshire beach." 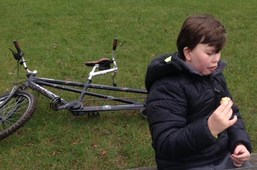 Christian and his Dad, Damian, collected our Northern Ireland based Viking Valhalla tandem in early January 2016.  He wrote on our Facebook site, "Park and Ride, and snack. Teachers strike makes a great excuse for a day out."  This is the second time that they have borrowed this tandem from us. 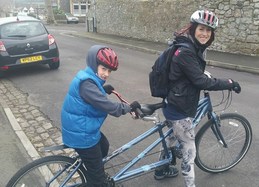 Lenny's Mum, Faye, collected Sadie, one of our Dursley based Viking Salerno tandems, at the start January 2017.  Faye wrote, "Lenny absolutely loved his first ever tandem ride: he didn't want to stop."  She also wrote, "I took my other son out first so I could get used to it. Lenny was great on it, pedalled when I needed him to. I forgot the hi viz's this time, but will remember them for the next ride. He has been looking forlornly at the shed since I put it away."

Emma from near Inverness 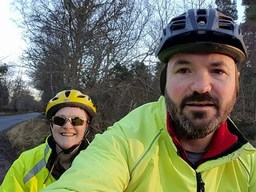 Emma and her husband have had our Highland based Viking Saratoga tandem since early January 2017.  She said on the day that she got the tandem, "Yay!! Our lovely local (Scottish Highlands) Charlotte's Tandems contact, Tedi, delivered Freya (a Viking tandem) to us today.
We've already been out for a spin. I'm hooked! First time I've experienced anything like proper cycling since my brain injury.  Wee bit terrifying to begin with, but very quickly forgot to be scared and enjoyed the exercise, fresh air, beautiful scenery (overlooking my hubby's butt), speed (within reason) and exhilaration.  Can't wait to go on a family run with our two kids for the first time in years.  Happy happy happy! "