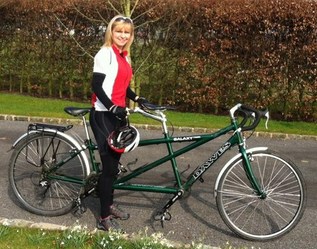 Janice and Alan collected our Lancashire based Dawes Galaxy tandem in early 2016.  Here she is getting ready for her first ride. 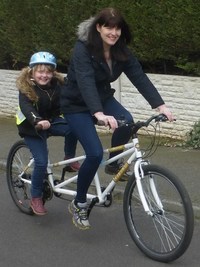 Faith and her Mum, Sue, collected one of our Cheshire based Viking tandems at the end of February 2016.  Sue said that day, on our Facebook Group, "Thank you. It's amazing to be able to get Faith on a bike at last. Looking forward to lots of weekends on the bike." 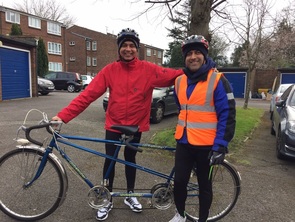 Bhavesh and his friend, Ketan, collected one of our Hertfordshire based Globetrotter tandems in mid-February 2016.  There are more photos and a video of them on our Facebook site.

Mark and his friend collected one of our Hertfordshire based Globetrotter tandems in February 2016.  More details and a photo are to follow.

Connor's Mum, Tricha, collected our Gloucestershire based Canyon tag-along in mid-February 2016.  She tried towing it behind the Schwinn tandem that she borrowed from us for her other son, Liam, see below. 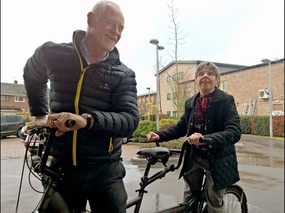 Christine has had our Shropshire based Barracuda California tandem since mid-February 2016.  Helper Ray said, "Assisted by staff, Haydn and Andy, they will be taking part along with others at the centre in the 'The Abbot's Wood Big Inclusivity Bike Quest' - a virtual LEJOG carried out both on the premises and on local cycle routes. Inspired by a talk by local author Michael McCarthy, they were challenged to follow in his footsteps and do a cycle ride from Land’s End to John O’Groats.
They are looking forward very much to clocking up the miles and Haydn says "We’re over the moon with the Charlotte's Tandems! There’s a definite buzz about the place today". More pics of Christine and Steve riding their tandems are promised. Best of luck!" 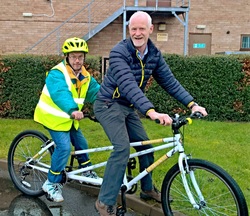 Steve has had our Shropshire based Viking Companion tandem since mid-February 2016.  See more details in the post about Christine, above, and also in our Facebook group. 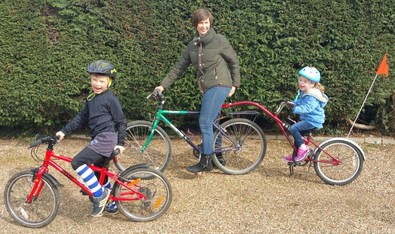 Elsa and her family are the first Borrowers of our Essex based tag-along and they collected it in mid-February 2016.  Her Mum, Cath, wrote on our Facebook Group, "She absolutely loved it especially the faster we went. Now to get her to pedal! Very easy to tow though. I have been concerned about her holding on as she can only hold on reliably with her right hand but she has been OK so far as long as I avoid the bumps! We will attempt some longer rides and let you know how we get on. Elsa has left sided hemiplegia (CP). Many thanks Charlotte's Tandems!" 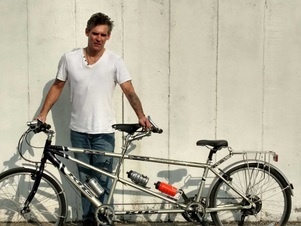 Paul is the first Borrower of our Powys based KHS Alite tandem and he collected it in mid-February 2016 to take part in a sponsored ride in the summer. 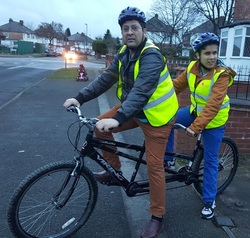 Haseeb's Dad collected our Shropshire based Viking Valhalla tandem at the start of February 2016.  His Mum wrote a fortnight later to say that they are really enjoying riding the tandem. 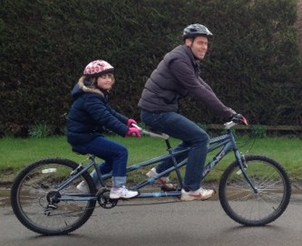 Lucy's Dad, Matt, collected one of our Gloucestershire based Viking Salerno tandems at the start of February 2016.  Matt wrote a fortnight later, "The weather has put pay to a couple of occasions we were planning on getting out! Had a great time on the tandem today. My son joined us while my wife went for a run. Lucy got the hang of the toe clips really quickly, which surprised me. There was the occasional request to Lucy asking her to pedal harder up some of the hills!! We were out for just over an hour. Looking forward to many more ventures. Thanks for giving us this opportunity." 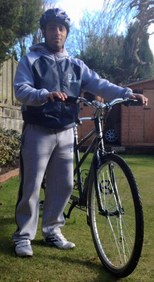 Salim collected our Lancashire based Viking Derwent tandem at the end of January 2016.  He siad on our Facebook group that, "This is a brilliant charity that brings such joy to my life. It has made me fallen in love with cycling again."
See several videos of him and his Cousin, Ifti, thundering through the streets of Blackburn, on our Facebook Group. 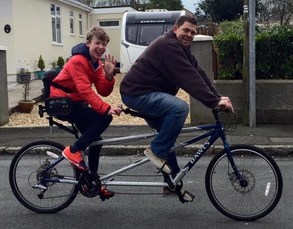 Harry has his own tandem but needed a backrest, so his parents have borrowed one of ours.  They have had it since mid-January 2016.  At the end of February, Steve, his Dad, wrote that it "works brilliantly. Thanks for all your help getting us on the road." 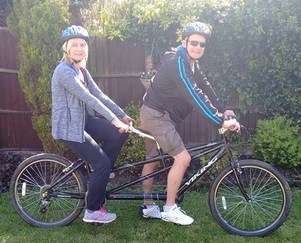 Debra and her husband, Paul, collected our Nottingham based Viking Saratoga tandem in mid-January 2016.  She wrote on our Facebook site in mid-May 2016, "Had some great adventures. Really enjoyed it" 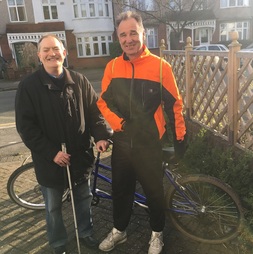 Kevin and his friend, Matt, collected our London based Konekt2 tandem in mid-January 2016. He later reported that "We had a little go on it yesterday, just to see how to balance, brake, turn etc. Got on well." 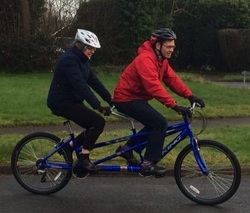 Pippa's Husband, Andrew, collected our brand new Hertfordshire based Viking Regency tandem in mid-January 2016.  She said on our Facebook group, "It has been amazing to have such freedom. Can't thank Charlotte's enough!
We've been out on the tandem for the last three weekends; each time being a little more adventurous. This was the second go last weekend. Yesterday we went off for about an hour - got rained on but we didn't care. It was great to be able to get out and Pippa is getting more confident in Andrew's driving!" 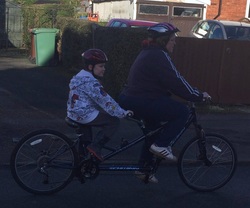 Liam and his Mum, Tricha, collected our Dursley based Schwinn Sierra tandem in mid-January 2016.  Tricia wrote on our Facebook group, "He's finally starting to try to pedal now. He does spend a lot of time shouting 'Stop! No, keep going! Stop! No, go faster! Wheeeeee!" so I'm pretty sure he's enjoying it!'"