David and Lana collected our Bath based Claud Butler tandem in March 2018 and have now bought their own tandem.  They didn't send a photo. 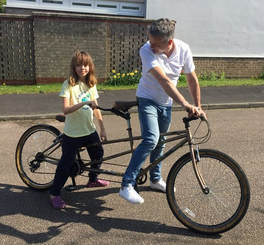 Aurelia and her family collected our Norwich based Viking Pennine Trail tandem in February.  Her Mum, Emma, said, "We’ve really enjoyed the opportunity for Aurelia to feel what it’s like to ride a bike and hope it helps her in learning to ride her own one day! " 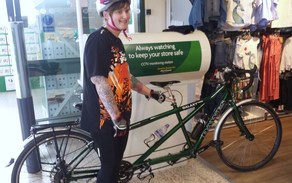 Rachel and Vincent collected our Lancashire based Dawes Galaxy in early 2018.  They were going to ride it to Blackpool in late February 2018 and send us some photos of them in action.

Charlotte and her Mum, Karen, collected our Oxford based Orbit Routier Tour tandem in mid-February 2018.  More details and a photo are to follow.

Alasdair and Meg collected our Viking Saratoga tandem trike in mid-February 2018.  Here they are on a 20 mile ride.  See their video on our Facebook site.  Meg wrote, "We’re all taking part in the Carten, but only dad and the four people taking it in turns on the tandem are part of a group - they are called Morello’s Marvels. We all will be riding together on the day though." 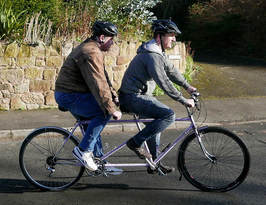 Nige and his friend collected our Cheshire based Columbia tandem in mid-February 2018.  He said, "I really enjoyed trying it out this morning when I collected it, and can’t wait to get going on it now." 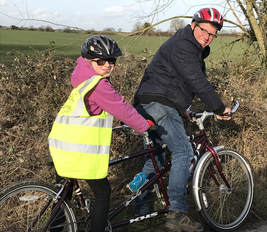 Ella and her parents, Michaela and Tony, collected our Dursley based KHS Tandemonia Comp tandem in mid-February 2018.  Michaela wrote a couple of days later, "Thanks again so much for the tandem.  Ella absolutely loves it and we will certainly get a lot of use out of it."

Freddie from near Winchester 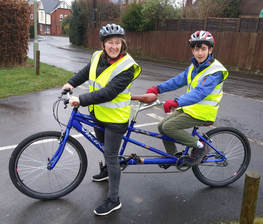 Freddie and his parents, Amanda and Tim, collected our Wiltshire based Viking Regency tandem in late January 2018.  This is the second tandem that they have borrowed from us: previously it was one of our Sussex based tandems in July 2015.  They are going to put his saddle up higher. 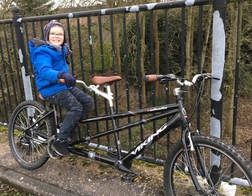 Jack and his Dad, Paul, collected our Shropshire based Viking Valhalla tandem in mid-January 2018.  Ray, our Shropshire Helper wrote on our Facebook site, "They have the traffic free Silkin Way to enjoy - a super disused railway running right through the town." 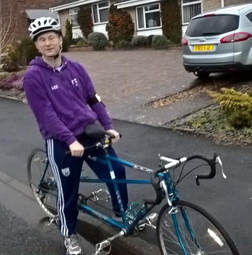 Lee's friend, Paul, collected our Gloucestershire based blue Orbit tandem in mid-January 2018.  They plan to take part in the Peopleton Duathlon in late February.  Lee wrote on our Facebook site in early February, "The bike road well: took a little adjusting to obviously after just riding a skinny solo road bike, but soon got into it and looking forward to more training next Saturday.
Lee did well particularly since he normally just runs so all being well things should go well." 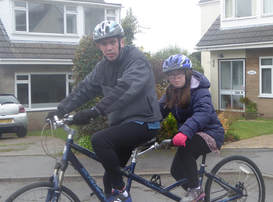 Rebecca's Dad, Stuart, collected our Gloucestershire based Schwinn Sierra tandem in early January 2018.  It is the second time that they have borrowed a tandem from us.  She wrote at the end of January, " She wrote today, "The new tandem is very nice, thank you. This afternoon Dad and me went to Blackberry Lane and to a park where we live on the tandem and that was so fun. This is a photo of me and Dad on the tandem having a great time on the tandem." 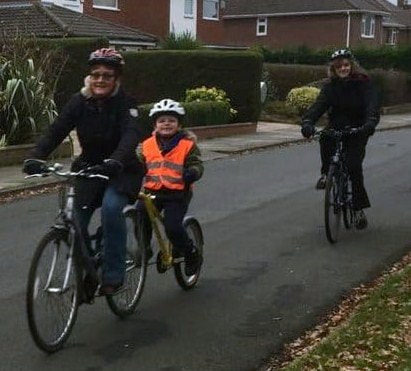 Michael and his Mum, Sarah, collected our Cheshire based Mission tag-along bike in early January 2018.  They are going to use it to cycle to school.  Here they are riding with his big brother. 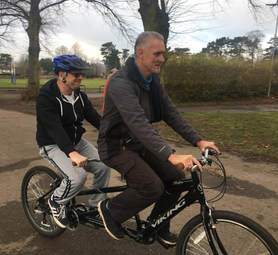 Liam and his Carer collected our Northamptonshire based Viking Saratoga tandem in early January 2018. 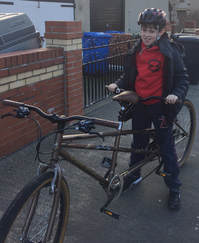 Logan and his Mum, Graunya, collected our Cheshire based Viking Pennine Trail tandem in early January 2018.  They previously borrowed the same tandem from September 2016 to May 2017.  Brian our Helper reported that "They intend cycling to school next week".  She wrote a fortnight later, "Pic of Logan on his first outing last week Monday.  One happy boy to be on his bike again."