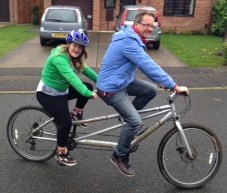 Freya and her Mum, Louise, collected our Sussex based Ammaco tandem in last July 2015.  Louise wrote, "Even though it's raining Freya and Dad are still enjoying their tandem ride. It's a shame it has to be returned soon. Hopefully we'll borrow again at some time." 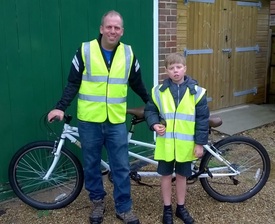 Fred and his Dad, Nick, collected one of our Sussex based Viking Companion tandems in late July 2015. 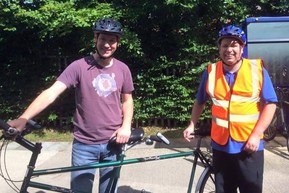 Chris' colleague, Ian, collected our Dursley based Thorn Adventure tandem in late July 2015.  Ian wrote on our Facebook site at the end of August, "This is me and my friend Chris preparing for a charity ride from Gloucester to Weston Super Mare. This photo shows the first time that Chris had ever been on a bike, so thank you Charlotte's Tandems." 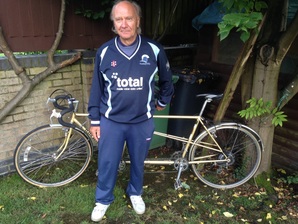 Terry and his friend, Gerald, collected our Dursley based Claud Butler tandem in late July 2015. Soon after, he wrote, "Thanks again for arranging this, I look forward to getting out on it shortly." 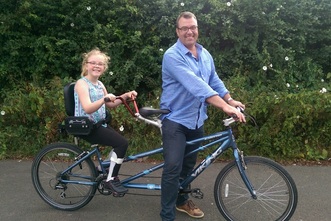 Lily and her Dad, Paul, drove all the way from Woking to Dursley to collect one of our Viking Salerno tandems and a backrest in late July 2015.  Her Mum wrote, "Paul and Lily have arrived back safely. I think the expression of joy on Lily's face in the attached says it all. Thank you so much for all your help organising a tandem for us to enjoy over the next couple of months. London Freecycle here we come! Photos of the day will follow. And we'll keep you posted on the other adventures we will have....." 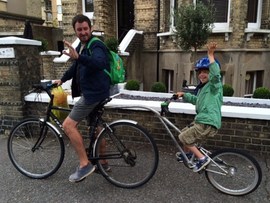 Theo's Dad, Lee, collected our Suusex based tag-along bike in late July 2015.  His Mum, Rosalind wrote, "Lee would like to express his gratitude for the care and attention provided by Charlie, who was ever so kind and helpful.  :)"
In September, she wrote, "It's been an absolute godsend and Lee and Theo have had fantastic times on it this summer. We appreciate it so very much." 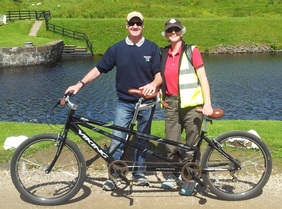 Annette and Mark collected our Highlands based Viking Vallhalla tandem called Freya in mid-July 2015.  They wrote soon after, "Attached a couple of photos of our recent trip out along the Caladonian Canal near Fort William.  Really enjoyed our day out and look forward to getting on it again.
Annette has Retinitus Pigmentosa, or also known as RP which is a combined hearing and sight loss. She had a coclear hearing implant to correct her poor hearing a few years ago, but unfortunately there is nothing that can be done for her failing eyesight. She has only approx 15% of her vision remaining.
We talked about purchasing a tandem but then found your website so decided to try you first.  Many thanks for your help."

Alice, Corey and Amy from Action For Blind People- Birmingham 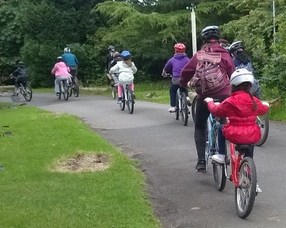 Alice, Corey, Amy and their families took part in a cycling activity day organised by Action For Blind People and Bewley Outdoors.  They used our Shropshire based Dawes Galaxy tandem, Viking Companion tandem and Bob Jackson tandem trike.  Paul from Bewdley Outdoors said, "The use of the tandems was amazing, as it started with the kids feeling round the bikes before getting on them. Then when you start, they panic and have to be reasured, then 10 mins on the back 'Big Smiles'". 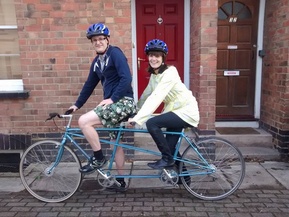 Megan's boyfriend, Ed, collected one of our Dursley based Richmond tandem in mid-July 2015.  Here they are setting off on their first ride. 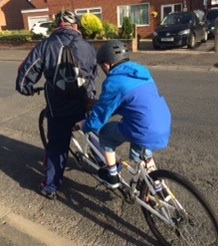 Ben and his parents collected one of our Lancashire based Viking Companion tandems in mid-July 2015.  His Mum, Julie, posted more photos and a video on our Facebook site. 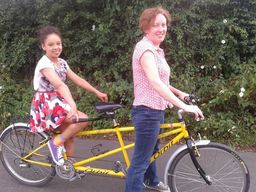 Seren and her Mum, Rachel, collected our Dursley based Orbit Gemini tandem in mid-July 2015. 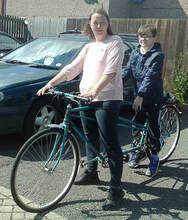 Lincoln and his Mum, Sarah, collected one of our Leicester based tandem in mid-July 2015.  Our Helper, Peter, wrote on our Facebook site, "Susan and her son Lincoln have collected the Peugeot tandem from me and are bravely riding it home. Lincoln has his school prom tomorrow and is planning to arrive in style." 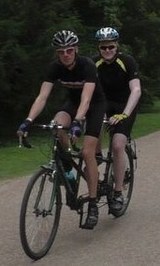 David and his pilot, Josh, borrowed, in mid-July 2015, one of our Lancashire based Dawes tandems to take part in the Goalball UK Coast to Coast ride in early August 2015.  More info can be found here. 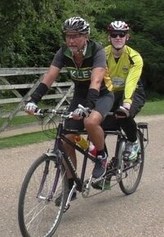 David and his pilot, Steph, borrowed, in mid-July 2015, one of our Lancashire based Dawes tandems to take part in the Goalball UK Coast to Coast ride in early August 2015.  More info can be found here.

Hamish and his Mum, Lucy, collected our Dursley based Adams tag-along in mid-July 2015.  Unfortunately he didn't ride it as Lucy says, "it's frankly dangerous whilst he is enjoying putting his hands and feet in the spokes." 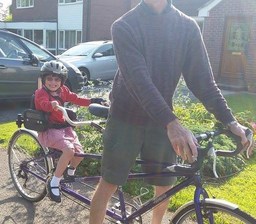 Savanna and her parents are the first borrowers of our Lancashire based Thorn Kiddyback tandem.  They've had it since early July 2015.  Her Mum, Helen, wrote on our Facebook Group, "Very, very excited girlie and colour is perfect purple her favourite....Happy adventures this summer....Thank you so very much.  Will keep you posted x"

Fred from near Winchester 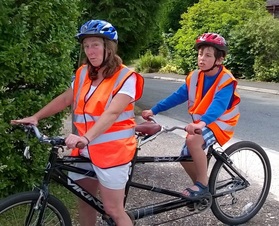 Fred and his Mum, Mandy, collected one of our Sussex based Viking Saratoga tandem in early July 2015.  Mandy wrote on our Facebook Group soon after, "I have been out practising on the tandem so I feel more confident with Freddie on the back. we are planning to go for a family outing tomorrow. Will send a photo."

Efa and her parents, Sion and Ceinwen, collected one of our Cheshire based Canyon tag-alongs in early July 2015.  They've had great fun riding it.  For another photo see our Facebook site.  They returned it in September 2016.

Corey and his Mum, Gemma, collected our Dursley based Canyon tag-along in early July 2015.  More details are to follow.