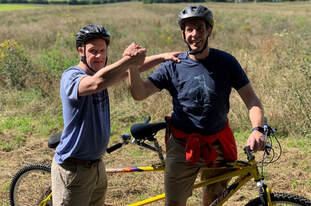 Rupert and his Brother, James, collected our Berkshire based Mission tandem at the end of July 2021.  James told our Facebook group, "Thanks guys for another great lend. Rupert and the family had a great time biking!" 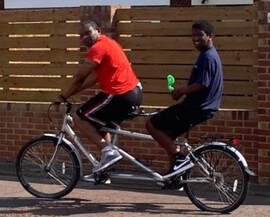 Ben and his parents collected our Newcastle based Dawes Discovery tandem at the end of July 2021  This is the second time that they have borrowed a tandem from us.  Apparently, he enjoys his cycle rides but won't wear his helmet. 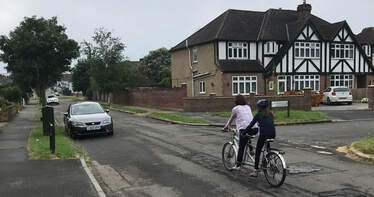 Anna and her Mum, Ina, collected one of our Surrey based tandems in late July 2021.  Ina wrote soon after, "Anna was over the moon when we got the tandem home and we already had a go riding it. She loved it and did a fantastic job! Photo for evidence:)
Many thanks to you for making this possible so quickly! Especially, as it is the start of the holidays which gives us plenty of opportunity to use the bike. Greatly appreciated! More (better photos) to follow:)"

Caitlin collected our Lancashire based Dawes tandem at the end of July 2021.  Her Mum, Julie told our Facebook group a couple of days later, "First outing today. A very wet ride around Carsington Water. The sun shone at the start then thunderstorms followed." 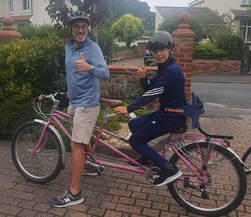 Will's Dad, Martin, collected our Liverpool based Viking Pink Link tandem and a Lancashire based backrest in late July 2021.  In mid-September Martin wrote, "Lots of fun thanks. So much so that we now have our own tandem and I have returned yours to Steve in Liverpool and the bike seat/harness to David in Lancashire. I have cc’d them so I can thank them again. Their support was fantastic.
Thanks again to the charity. The loan has served the purpose I hoped in that it gave us the confidence to go and get our own bike an that has opened up lots of possibilities for us all." 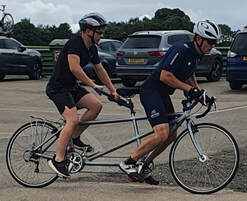 Ronnie and his Mum, Karen, collected our Norfolk based Trek tandem at the end of July 2021.  It is the second time that they have borrowed it from us.  Karen told our Facebook group days later, "Great day training with the GB paratriathlon team. Lots of techniques learnt and new friends made. Special thanks to Alex and Jenny of @CharlottesTandems for lending us the bike again at such short notice". 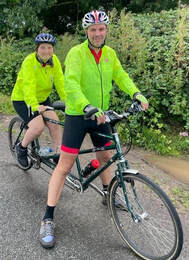 Holly's Dad, Geoff, collected our Gloucestershire based green Thorn Adventure tandem in late July 2021.  He told our Facebook group at the start of August, "Nice ride on my club's annual treasure hunt. Thanks for lending the tandem!" 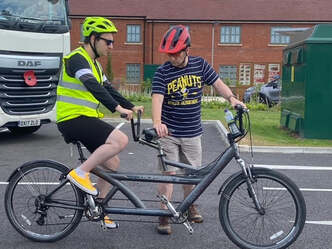 William's Dad and Brother collected our Shropshire based Barracuda tandem in late July 2021.  His Mum, Shana, reports: "Will was out with Owen (Dad) on the tandem yesterday. Did a five mile round trip with a lunch stop in the middle as a first go and all went fine. I was following behind on my own bike and Will looked very relaxed and curious of the surroundings on the journey." 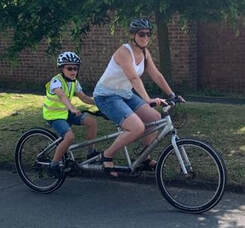 Lucas and his Mum, Clare, collected our Suffolk based Ammaco tandem in mid-July 2021.  Clare wrote the next day, "Lucas is 8 and is so happy to be able to get out on a bike this summer and be able to chat whilst cycling. He also loves that he can hear me describe our surroundings while we cycle." 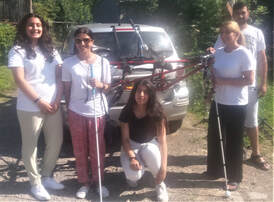 Rehnaz, her sister, her nieces and her brother in law, all collected our Gloucestershire based Mission tandem in mid-July 2021.  One of the nieces will take her Mum and Auntie out in turn. 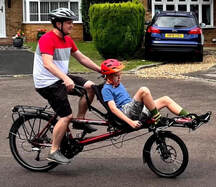 Dylan and his Dad, Alex, collected our Berkshire base Hase Pino tandem in mid-July 2021.  This is the second time that thy have borrowed from us.  His Dad, told our Facebook group in early August, "Here’s me and Dylan trying out a rather interesting tandem. Did a trial go a little while ago then today we did a proper trip all the way to the fish and chip shop! Given that we tried a tandem last year that was apparently the worst thing he’d ever done we’re pretty pleased with how it’s going so far." 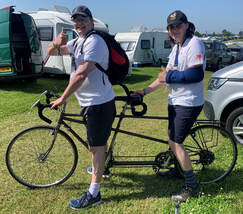 Oli and his Dad, Adrian, and his son collected our Shropshire based Dawes Super Galaxy tandem in mid-July 2021.  Soon after Adrian wrote, "A little wobbly to start but we soon got the hang of it."

Reece and her Mum, Rachel, collected our Liverpool based Trek tag-along bike in mid-July 2021.  More details and a photo are to follow.

Sonia and Lucas collected our Liverpool based Dawes Galaxy tandem in mid-July 2021.  More details and a photo are to follow. 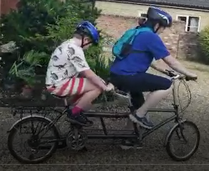 Edward and his Mum, Mel, collected our Lincolnshire based KHS Sausage Dog tandem called Jeffrey, in early July 2021.  Mel said, "Thanks, my son is enjoying the tandem very much, when I am able to get him out of the house."

Rosie from the TV 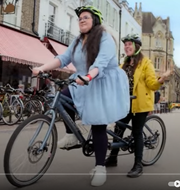 Comedian Rosie Jones borrowed our Cambridgeshire based Raleigh Adventurer tandem in early July 2021 for her TV series Mission: Accessible.  The footage can be seen here, https://youtu.be/m9rM7i93IuQ 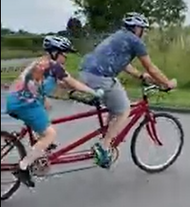 Oscar's Dad, Andrew, collected our newly donated Gloucestershire based red Cannondale tandem in early July 2021.  Andrew told our Facebook group, "Thank you to Charlotte's Tandems and Alex for our new summer adventure opportunity on this beautiful red Tandem. Oscar has loved our little adventures (even though he needs to keep his feet on the pedals) so far and many more to come. We can’t thank you enough. He eventually learnt to ride a bike independently last year but not safely enough on the roads" 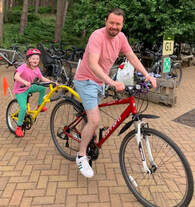 Isa and her Mum, Caroline, collected our Norfolk based tag-along bike in early July 2021.  Caroline told our Facebook group, "Thank you Jenny and Charlotte's Tandems for setting us up with the tag along for our trip to Center Parcs. Isla was a bit wary at first but took to it brilliantly and loved it. Look at her face!
We are looking forward to taking it on our hols to Devon and exploring on bikes which wouldn’t have been possible on her balance bike as she couldn’t keep up."

Annette and Andy collected our newly donated Shropshire based Orbit tandem in early July 2021.  Our Shropshire Helper, Ray, told our Facebook group that here they are "trying out the Orbit tandem, a new addition to the Shropshire fleet and kindly gifted recently by John and Christine (who are now going for an electric tandem). Enjoy your tandem rides together under sunny summer skies!" 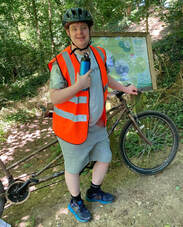 Owen and his Support Worker, Clive, collected our Norfolk based Viking Pennine Trail tandem in early July 2021.  Jenny told our Facebook group in mid-July, "Owen was really enthusiastic when he came to pick it up and on their first ride they clocked up 7 miles. They were back out today in the glorious sunshine and here are a few photos. They make me feel so happy Clive says " what a marvelous forward thinking charity Charlotte's Tandems is! Much kudos to everyone involved". 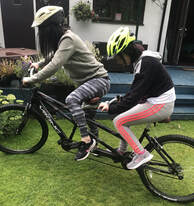 Jasmine and her Grandma, Tanya, collected our Warwickshire based Viking Valhalla tandem in early July 2021.  Tanya told our Facebook group after a month, "Just posting photos of Jasmine on her tandem, we are really excited to have something that enables us all to go out as a family". 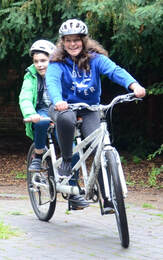 George and his Mum, Jenny, collected our Shropshire based Viking Tiber Trail  tandem in early July 2021.  Helper Ray told our Facebook group, "They came down to yesterday's 'Pedal in the Park' in Shrewsbury to try out a Charlotte's Tandem - and to take it home for lots of happy summer rides. George was a bit anxious about meeting me and thought I'd be scary but was pleasantly surprised when I wasn't! I gave him a try first (he loved going so fast) and then with Mum. Enjoy cycling with George, Jenny, happy memories you will have forever."

Roscoe and his Mum, Becky, collected our Surrey based Viking Salerno tandem in early July 2021.  Becky reported that Roscoe was very excited.  More details and a photo are to follow.