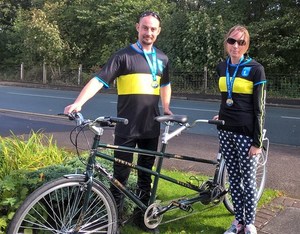 Michelle and her husband, Tommo, collected our Lancashire based Viking Derwent tandem at the end of June 2016. She said on our Facebook site, "Thank you so much for lending us a tandem. My husband and I went for a ride on Sunday and we thoroughly enjoyed it, cant wait til next time xxxx"
The photo shows them after winning their medals from the Fleetwood Triathlon in late-September, just before they returned the tandem. 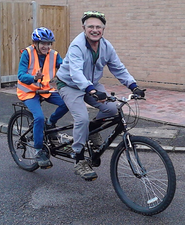 Paula and Jeff from Barnet borrowed our Hertfortshire based Viking Valhalla tandem in mid-June 2016. They had it for just one hour and then decided to buy their own. 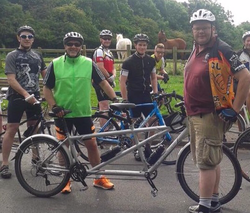 Russ collected our North-East based Dawes Discovery tandem in mid-June 2016. He wrote a few days later on our Facebook site that he had his, "first ride out on a tandem and had the pleasure of being invited out with the Hartlepool Old Boys RFC cycling club. Absolutely loved getting back in the saddle after 5 years. My lack of vision is no longer a disability. Thanks to everyone who helps to run Charlotte's Tandems." 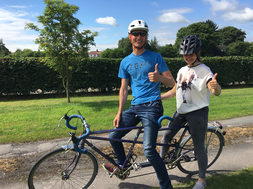 Lauren's Dad, Al, collected our Stafordshire based Dawes tandem in mid-June 2016.  Al wrote, "She really does enjoy it although she's still a bit wobbly. Having some good fun." 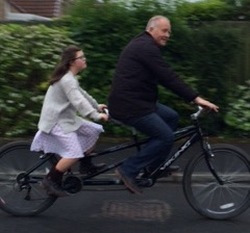 Daisy's parents collected our North-East based Viking Valhalla tandem in mid-June 2016.  Lisa, her Mum, wrote the next day, "Daisy was on it as soon as we got home and absolutely loves it. In fact we've all had a go. I can see a fun packed summer ahead!" and "... had a quick go as soon as it was out of the car but in her words it's "awesome!" We're really looking forward to getting out and about on it and as a family it will make a big difference to us!"

Amy's Dad, Miles, collected our Yorkshire based KHS tandem in mid-June 2015.  More details and a photo are to follow.

Stuart's wife collected one of our Dursley based Orbit tandems in mid-June 2015.  He said, "Been cycling in Wales.  Managed a good ride with my brother once we got used to the balancing and setting off it was lots of fun. Thank you so much for enabling me to do some great trips. Thanks." 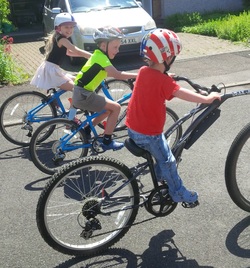 Bede and his Dad collected our Dursley based Adams tag-along and Thorn crank shorteners in mid-June 2016.  They are the first borrowers of each.  See our Facebook site for a lovely video of him riding the tag-along. 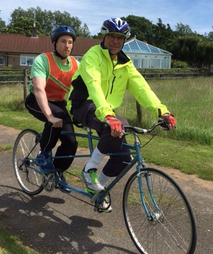 Liam's friend, Zdenek, collected one of our Dursley based Richmond tandems in mid-June 2016.  Laim had a fall before he rode our tandem.  Zdenek then wrote, "Liam has now recovered from his fall (bruised ribs and legs) and we had a great ride through Somerset countryside.  The day started inauspiciously with the front tyre blowing up on a busy road. Fortunately, I was on my way to Liam who lives some 6 miles away and was alone on the bike, going up a hill, so got off OK.  Bought a new tyre and an inner tube and 2 hours later we were on our way - viz the pics.
Having used an old heavy tandem previously, we found this to be a truly superior machine, light, yet rigid and responsive. The gears are clearly designed for speed rather than hills but we got quickly used to it." 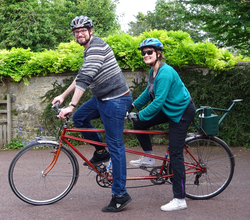 Kate's husband, Robert, collected our Dursley based Globetrotter tandem in mid-June 2016. Kate wrote on our Facebook site, "A picture of us popping down to the allotment in style thanks to Charlotte's Tandems (hence the watering can on the back)! I have recently been discharged from hospital after having a relapse with my MS, and have only just started walking again properly. Using a tandem enables me to get on a bike again, as I wouldn't be able to do this on my own at the moment. We just need to practise a bit more now before we venture further into the Somerset countryside....Thank you very much for letting us borrow one!"
They have ended up buying their own tandem. 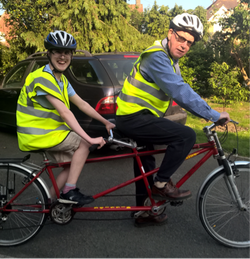 Ethan's Grandad, Geoff, collected our Dursley based Mission Duet tandem at the start of June 2016.  They are its first Borrowers.  Geoff wrote a fortnight later, "Borrowing the tandem has given Ethan the freedom to ride an adult bicycle without being ridiculed by his peers. He thoroughly enjoys every moment he is out on it, and greatly appreciates this opportunity." 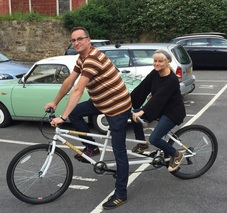 India and her Partner collected our Lancashire based Viking Companion at the start of June 2016.  She wrote, "It's going great! We took it away to a car rally last weekend and everyone loved it. We even had the paper, Auto Express photograph us on it.
It was interesting as I could get around the grounds without a wheelchair, so much nicer, as well as getting to and fro and enjoying the countryside." 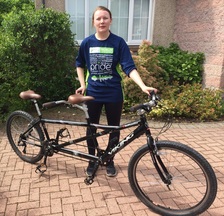 Samantha's Dad, Tony, collected one of our Edinburgh based Viking Valhalla tandems at the start of June 2016.  She has added extra photos of her, the tandem, her Dad and Husband on our Twitter account.