Emma-Louise and her Mum, Paula, collected our Cambridge based Dawes Super Galaxy tandem at the end of June 2017.  More details and a photo are to follow. 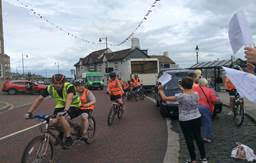 Scott joined his school friends on a ride along the Northumberland coast and castles from Berwick to Tynemouth.  His Head of Sixth Form, Paul, wrote, "The trip was very successful and Scott loved it. He completed the 90 odd miles over three days and we were blessed with the weather."

Sienna's Mum, Emma, collected our Norfolk based Viking Pennine Trail tandem in late-June 2017.  Emma wrote on our Facebook site, "We are enjoying the experience." 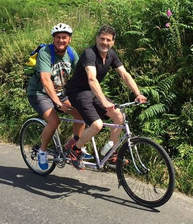 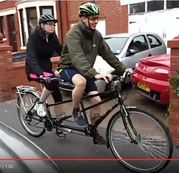 Christine and her husband, Ross, collected our Lancashire based Viking Derwent in late-June 2017.  Here is a video of them in action.

Adrian from Burnham on Sea 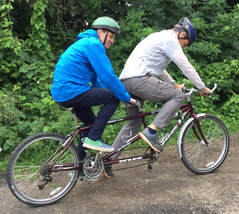 Rob collected our Dursley based KHS Tandemonium tandem in late-June 2017 for Raymond.  Unfortunately he wouldn't ride it. Rob then updated us with, "Adrian from another home used the tandem today with Dave as his support. He seemed to really enjoy this, and will hopefully be scheduling this in again in the week." 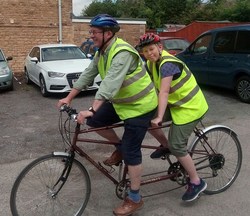 Eliza's Dad, Ian, collected our Dursley based maroon Orbit hybrid tandem in late-June 2017.  Ian said, "We're on a learning curve, but can set off from a kerb downhill now. The uphill starts are a thing to behold. It's gradually turning from the Tandem of Terror to the Transport of Delight." 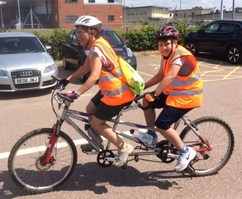 Henry and his Mum, Barbara, collected our Essex based Highway Verticl tandem in mid-June 2017.  She says, "Thank you for the loan of one of your tandems.  Collected it last Friday & went out on a practice ride in the nearby cul de sac.  This was taken the next day 😊"

Rory and his Mum, Sally, collected one of our Yorkshire based KHS Sausage Dog tandems in mid-June 2017.  They had one last summer too.

Sarah and her husband collected one of our Yorkshire based KHS Sausage Dog tandems in mid-June 2017.  More details and a photo are to follow. 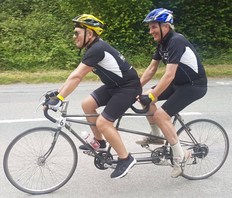 Chris and Martin collected our Shropshire based Dawes Galaxy tandem in June 2017.  Our Helper, Ray, wrote, "Due to progressive loss of sight, Chris has been unable to ride a bike for over 10 years, however on Saturday they rode 106 miles from Wolverhampton to Aberdovey. Dave says "We were pedalling for about 10 hours and got there just after 6pm. Given the fact that Chris had only managed two hours of training prior to the ride, this was a mammoth effort on his part. (And it’s nice that we were able confound those that were taking bets that we wouldn’t make it out of Wolverhampton)".
Great to see the Charlotte's Tandems logos on your smart jerseys! Well done both." 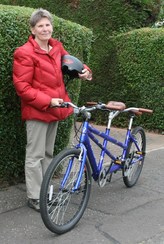 Marjorie and Kenneth collected our Edinburgh based Viking Regency tandem in mid-June 2017.  Kenneth wrote, "Many thanks for allowing us the use of this, it is great fun, Marjorie loves it (so do I)."

Matilda from near Swansea 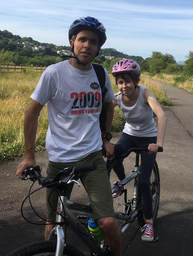 Matilda's Dad, Owain, collected Charlotte's original tandem, our Pembrokeshire based Raleigh Pioneer U+1, in mid-June 2017.   Owain said that she loved it and has become our Helper for his region.

Declan from the South West 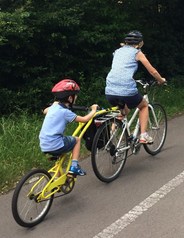 Declan and his Mum, Pauline, collected one of our Dursley based Adams tag-along bikes in mid-June 2017.  Pauline said that it will be very useful in getting to afternoon activities whilst there are lots of roadworks near them.  She added the next day, "Here we are on our first practise ride on the local cycle track. The first 500m were a bit wobbly but with minor adjustments to height of saddle and angle of handle bars, plus growing confidence from both riders, things improved!
Next outing will be on local minor roads with big brother as protective outrider!" 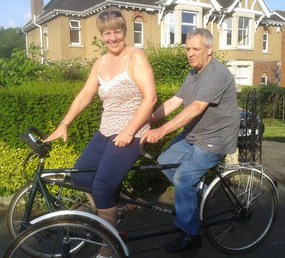 Graham from Peterborough and his Assistant, Kim, collected our Newton Dawes tandem trike in mid-June 2017. He is thinking of buying his own eventually. 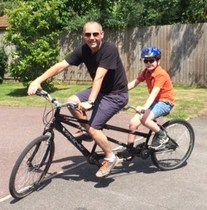 Jacob's Dad, Neil, collected our Surrey based Viking Valhalla in mid-June 2017.  Here they are in action. 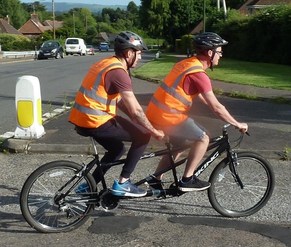 Alex and his friend, Greg, collected one of our Sussex based Viking Saratoga in mid-June 2017.  They are going to ride in the London 46. 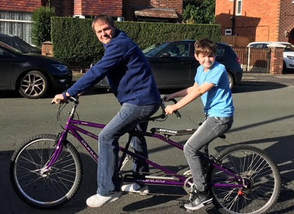 Luke and his parents collected our Cheshire based Burley tandem in mid-June 2017.  It is the second time that they have borrowed a tandem from us.   At the end of October, Semina, his Mum wrote, "Luke loved using this tandem he found it much faster than the other one we borrowed. We couldn’t manage to get Luke to wear his hat this time as he is having issues with hats and feeling claustrophobic so we just had short rides out, nothing too adventurous. Thank you again for letting us use your fantastic bikes!!"

Mandy and her husband, Keith, collected one of our Sussex based Viking Companion tandems in early May 2017. 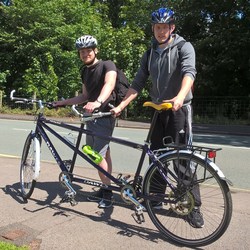 Glenn and Charlie collected our Lancashire based Dawes Kalantar in early June 2017.  Helper, David, wrote on our Facebook site, "As you can see Glenn is on the tall side with Charlie slightly shorter, not the ideal combination for Captain and Stoker. We did a very quick Tandem Training Course, then off they went to ride home to Lancaster. The lads are doing their own version of C to C, Calais to Cologne (return), to raise funds for RNIB. Thank you RNIB for recommending Charlotte's Tandems to Glenn." 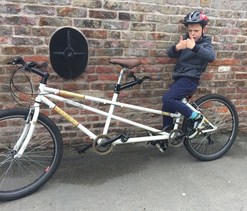 Luke and his Dad collected our Lancashire based Viking Companion in early June 2017.  Our Helper, David, said on our Facebook site that Luke "... said that he liked it and would take it home for further testing."  See our Facebook site for a video of him in action on the tandem. 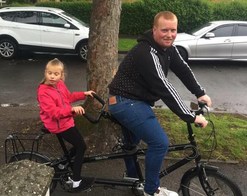 Millie and Luke are the first Borrowers of our West Midlands based Circe tandem.  They rode it the 5 miles home in early June 2017 and look forward to lots more riding. 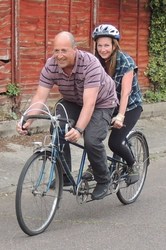 Anne-Marie and her husband,Bryn, collected one of our Hertfordshire based Globetrotter tandems at the start of June 2017.  She said, "Steve was amazing and helped showed us how to get started. It's going to be a real challenge for me with my physical issues but he was so patient and gave us some great tips.""Don't quote me but I'm still struggling with not being in control!!!! A work in progress 😉" 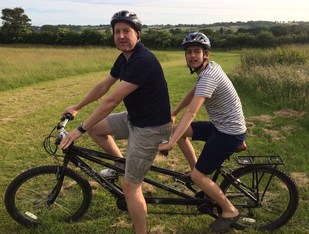 Owen and his Dad, Mark, collected our Hertfordshire based Viking Valhalla tandem at the start of June 2017.  Mark wrote, "As you can see, Owen is really enjoying his tandem experience!"