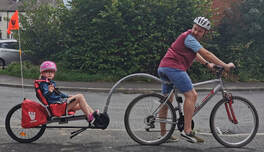 Amelia and her parents collected the Shropshire based Weehoo tag-along bike at the end of June 2020.  Her Mum wrote soon after, "Here’s a photo of Amelia’s first outing in the trailer. She absolutely loves it! I’ll send you a video as well, when she goes in it next time. You’ll see her flapping her hands a lot, as this is what she does when she’s very excited!  Many thanks" 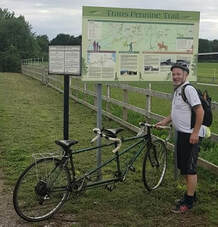 Victor's son Carl collected our Liverpool based Dawes Galaxy tandem at the end of June 2020.  Carl wrote on our Facebook group, "This was the first time my dad has been able to get on a bike in over a year. I said to him that we will go out for an afternoon ride...we ended up clocking 52 KM. Initially it was hard to get balance and control but as soon as we began communicating and signalling then it became a lot easier. Thank you so much for the Tandem, dad loves it and is "feeling alive again". Cant wait for our next ride and a massive thank you to Steve for arranging everything."

Amber and her Mum, Liz, collected the Selby based KHS Sausage Dog tandem at the end of June 2020.  Aber said, the same day on our Facebook group, "We picked this up from Ian near York today. My daughter, Amber, has ASD and is little unsure in new places so we took it home to try it out. Great news is she absolutely loves it. We're really excited to be able to do family bike rides with her older brother, which have been impossible since she rejected the tag along." 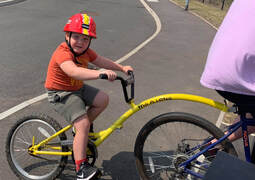 Archie and his Mum, Lori, collected our Warwickshire based Ammaco tag-along bike at the end of June 2020.  Lori told our Facebook group in early August, "Had the tag along from Simon in Warwickshire for Archie who is 5 and has autism. It’s taking its time to get him used to it and he’s not got the hang of peddling yet but he’s stopped trying to get off whilst it’s moving. Although he does still let go."

Isis and her Dad, Mick, collected one of our Lancashire based Viking Companion tandem in late June 2020.  That day Mick wrote on our Facebook group, "Hello everyone, just had a couple of taster rides and am having issues with keeping feet on pedals and also of fear of falling off."  After some advice on there, he updated us and said that he'd followed some advice and was now much happier and Isis's Grandma was going to make some pedal straps. 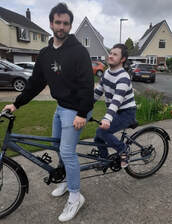 Morgan and his parents collected our Lancashire based Raleigh Adventurer in late June 2020. He is its first Borrower.  Helper Davis wrote, "Morgan has the Lancashire based Raleigh Adventurer on loan, the first borrower since it joined the Charlotte's Tandems fleet. Initially Morgan struggled keeping his feet on the pedals, but mum Anne reports; "Morgan has got the hang of the pedals now and absolutely loves going for rides with his twin brother Josh". Just look at Morgan's face, is that Hero Worship or what!! Well done lads, enjoy your cycling." 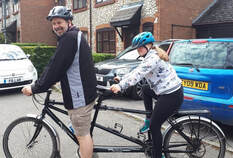 ​Sadie and her Dad, James, collected our Hertfordshire based Orbit Routier Tour tandem in late June 2020.  James wrote to our Facebook group in early July, "Here is Sadie getting to grips with the tandem we have borrowed. She has loved her rides so far, although clearly needs some help in the helmet department." 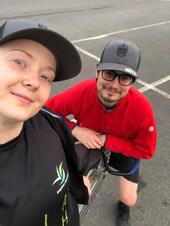 Rob and his partner, Loren, collected our Norfolk based Trek tandem in late June 2020.  In mid-August, Rob wrote to our Facebook group, "So we’ve had a Trek tandem in Norwich for over a month now. Finally starting to get to grips with it after years of riding and racing solo.  We have a blog coming out this week on our online triathlon club Wikiwiki so without giving much away, there will be lots of laughs for you to have (mostly at our expense!).
Charlotte's Tandems get lots of plugs and sorry for not getting this done sooner
Jenny Mayne and Alex Reeves!!
(Photo of Loren Taylor and I in Homebase car park, Norwich - our safe place to practise!!)" 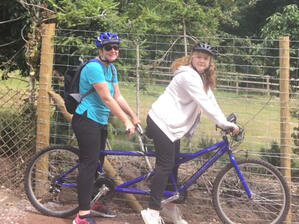 Liz and her sister collected our Surrey based Reflex Timberline tandem in late June 2020.  She wrote on our Facebook group in July, "Thanks so much Charlotte's Tandems for lending me a tandem. My daughter and I are really enjoying going out together in the evenings." 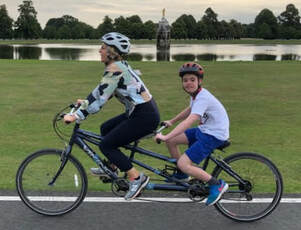 Oli and his Mum, Rachel, collected our Surrey based Viking Salerno in late June 2020.  Rachel said in mid-July, "It was fab to get out and about together at last, it has taken us a long time to get Oli first on the bike, then on it in the garden, then on it in the drive etc etc..   Many thanks for the loan, it has given us the confidence that we should look into buying a tandem."

Robert from the Cullercoats

Laura collected our Newcastle based Dawes Galaxy tandem in late June 2020.  Her Dad, Robert, has previously borrowed from us with his son, Alan.  More details and a photo are to follow. 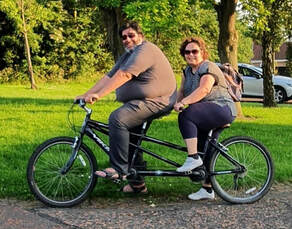 Matt and his parents collected one of our Sussex based Viking Valhalla tandems in June 2020.  His Mum, Luci, wrote at the end of July, " We are so grateful and it was wonderful to take it in holiday with us"

Anthony and his partner, Anne, collected the Reading based Thorn tandem in mid-June 2020.  Unfortunately, Anne did not like riding it, so they returned it soon after 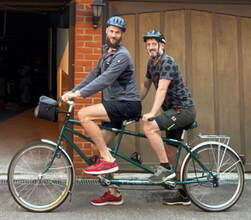 Peter and Ben collected our Suffolk based Thorn Raven tandem in mid-June 2020.

Catherine and Shane collected our Cambridgeshire based Mercian tandem in June 2020.  They are its first Borrowers.  More details and a photo are to follow.

Poppy and her Dad, Simon, collected our newly restored, Gloucestershire based, Viking Saratoga tandem in mid-June 2020.  You can see them on their test ride in a video on our Facebook site.  They had no problems riding up the steep hill, so will be fine for the steep slopes of Bath.

Charlie's Mum, Kelly collected our brand new Lincolnshire based Viking Companion tandem in mid-June 2020.  It is Nicola's first hire, so congratulations to her.  Unfortunatley he wouldn't ride it properly

Ethan and his Mum swapped our Warwickshire based 24" wheel Tag-along for the Warwickshire based Orbit Gemini tandem in mid-June 2020.  See a video of them in action on our Facebook site.  Helper Simon said there, "Ethan is going to be a brilliant stoker👏"

Josh and his Dad, Dom, collected our Cambridgeshire based Orbit Gemini tandem in mid-June 2020.  More details and a photo are to follow.

Dave collected our Norfolk based Ammaco tag-along bike for his son in mid-June 2020.  More details and a photo are to follow. 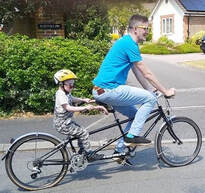 Zac and his Dad, Dom, collected our Sussex based Thorn Kiddybak tandem in mid-June 2020. 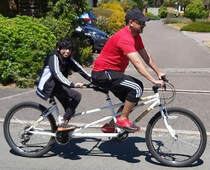 Raylan and his Dad, Maz, collected our Sussex based Viking Companion tandem in mid-June 2020.  They plan to ride "in front of the queen." 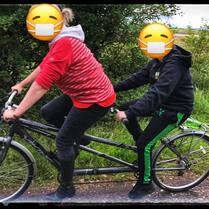 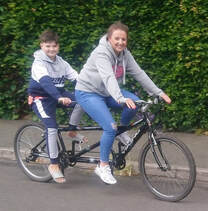 Teddy and his Mum, Jo, collected our Cheshire based Viking Valhalla tandem in early June 2020.  Jo said on our Facebook Group that evening, "Thank you so much Brian. We’ve been out tonight for 20 mins and he didn’t want to come home. He was laughing the whole time. Thank you so much for giving us the opportunity for him to feel the wind in his hair like that for the first time ❤️❤️"

Finn and his parents collected our Hertforrdshire based Ammaco tag-along bike and Adams backrest in early June 2020.  Danielle wrote on our Facebook group at the end of June, "Thank you so much for lending us the tag along for my son Finn. Not the best photos as Finn was very nervous but once on he absolutely loved it. He refused a helmet so we just had a short gentle ride but he really enjoyed it. Thank you." 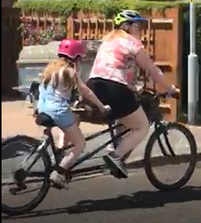 Evelyn and her Mum, Emma, collected our Oxford based Viking Timberwolf tandem in early June 2020.  She said a week later on our Facebook site that the video on there shows, "Evelyn’s maiden voyage on the tandem we borrowed last week. She loved it immediately and we have now cycled to our local park for a picnic. I can see many exciting adventures ahead for us-thank you!" 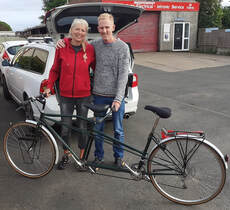 Mark and Jo collected our newly donated, Yorkshire based, Pashley tandem in early June 2020.  They were planning to have a practice ride as soon as they got home.  Unfortnatley his balance has deterioated since collecting the tandem, so they were going to return it soon after.

Frank collected our newly donated Surrey based MTB tandem in early June 2020.  He is it's first Borrower and more details and a photo are to follow.

Kyle and Chloe collected the Surrey based Orbit tandem in early June 2020.  Unfortunatley Chloe didn't like riding it so they handed it back soon after. 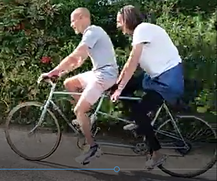 Angela and David collected our Gloucestershire based blue Claud Butler Majestic tandem in early June 2020.   Angela is over 6' so they are gong to put some higher Stoker's handlebars on.  See them in action on our Facebook site.  David said there, "Thanks so much for the bike, we can't wait to get out.  Would love to put lively guide dog Flynn on a trailer behind, but that might be pushing it!"

Toby's Mum, Laura, collected our Yorkshire based Adams Shifter 7 tag-along bike in early June 2020.  Laura wrote on our Facebook group in early July, "We collected the 'tagalong' from Ian our Yorkshire Helper a few weeks ago. Toby has a trike which he rides confidently but we wanted to go for longer (and quicker!) rides as a family.
The first few rides got us some strange looks as Toby screamed to 'stop, let me get off!' but we preserved and he's loving it now. Thank you so much. We re now able to go out for a decent rides together. 😃😃😃😃😃 And we get further than the end of the village 😍" 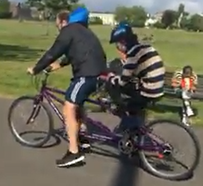 Sam and his Dad, Gary, collected our Liverpool based Burley Samba tandem in early June 2020.  See a video of them in action on our Facebook site, where Karen wrote that it was their first ride and that "Sam really enjoyed it and I think it will really build his confidence up. Thankyou so much!!!" 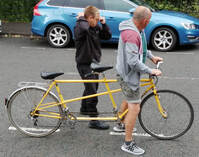 Euan and his Dad, Steven, collected our North-East based Pat Rohan tandem in early June 2020.

Denise and Jeff, collected our North-East based Dawes Discovery tandem in early June 2020.

Will's Dad, Paul, collected one of our Cheshire based Trek tag-along bikes in early June 2020.  More details and a photo are to follow.

Isobel's Dad, Brian, collected our Gloucestershire based Viking Valhalla tandem at the start of June 2020.  Brian said, "Got Isobel out for a short ride today and got a quick video clip - she’s so happy!"  In mid-August he updated us with the following.
"I wanted to let you know how much Isobel is enjoying her tandem loan, and how much it’s benefitting her. We are in a routine of getting out at least once every day and are expanding our range considerably now as we both feel more adventurous. We have also been out on several all-family cycles together and that’s the first time we have achieved that in years.
Isobel is absolutely loving being out in the fresh air, us spending time together, and particularly having a fun way to get just the right kind of exercise. Indeed her physio has recently commented on how much progress she’s making as even if she doesn’t have the energy for very much stoking, simply the action of following through on the pedals helps with muscle conditioning and strengthening.
Suffice to say the bike continues to be an unmitigated success and Isobel could not be more grateful. Thank you so much."