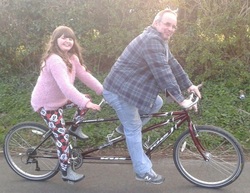 Zoe and her Dad, Stuart, collected our Dursley based KHS tandem at the very end of March 2016.  This is the third tandem that they have had from us. 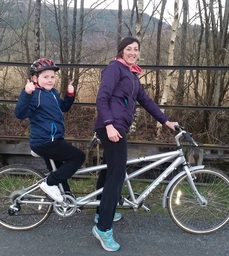 Dafydd and his Mum, Nia, collected our Dolgellau based Dawes Duet tandem at the very end of March 2016.  His Mum wrote that the photo shows Dafydd "out on his first ever bike ride with his proud Mami x 5 miles done. He will sleep tonight" 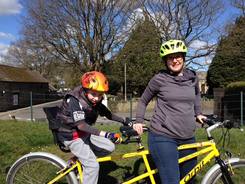 Ioan and his Mum, Kate, collected our Gloucestershire based Orbit Gemini and one of our Adams backrests at the end of March 2016.  This is the third time that they have borrowed a tandem from us.  She wrote a couple of days later that "Beautiful weather to be out on the tandem. Ioan exhausted now." and that she would chance Ioan's handlebars to make it more comfortable for him. 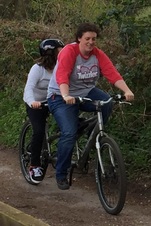 Peanut and her Mum, Kris, and her daughter collected our Surrey based Viking Saratoga at the end of March 2016.   Here they are on their second ride before the hail arrived. 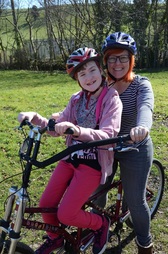 Olivia and her Mum, Sharon, collected our Shropshire based Buddy Bike in late March 2016.

This is Diran's second hire from us and this time it is our London based Thorn Discovery tandem.  Here is is with friends on a 35 km ride. 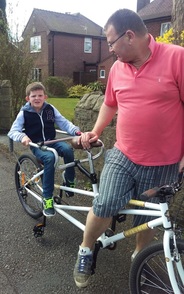 Matthew and his family collected the Lancashire based Viking Companion in late March 2016.  David, our Helper, has added bars to it to help stop Matthew from escaping.  His Mum wrote, "We really do appreciate the work David put in to allow Matthew the chance to try cycling and I have to say that I think he is now starting to enjoy it, although we still need to get him to wear his helmet whilst on the bike!We have been out a few times now. The first time he insisted on peddling backwards and did keep taking his feet out of the pedal stirrups, but the second time we secured his feet with some electrical tape and that solved the problem. The third attempt was much more enjoyable!
We have only cycled around quiet roads - we are working on wearing his helmet in the house to get him used to it. A family cycle further afield is planned for this weekend.  Thanks again".
She wrote in late November, "Matthew enjoys going out but struggles with the pedals. We need to secure his feet for safety which restricts how far we can cycle as he only tolerates his feet restricted for a short period and can be a bit unpredictable when he decides he's not happy.
The bike has really helped us to understand what works best and we have enjoyed cycle time as a family. The adaptations made by David were great and when Matthew is happy he is very comfortable and safe in the seat."

Sophie collected our brand new Suffolk based Viking Regency at the end of March 2016.  She wrote in mid- April, "The tandem is great and we are enjoying going out on the sun. I haven't got a way to take Julia (age 4) but hope to borrow a trailer soon.  Thanks again."

Justine and her husband, Peter, collected our Cheshire based Viking Valhalla in mid-March 2016.  More details and a photo are to follow. 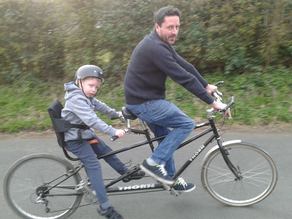 Ethan and his Dad, Chris, collected one of our Gloucestershire based Thorn Kiddyback tandems and an Adams backrest in mid-March 2016.  Chris will add some toe straps to keep Ethan's feet on the pedals. 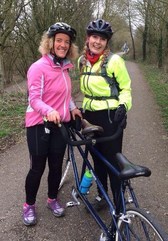 Liz collected our North-East based Dawes Galaxy tandem in mid-March 2016.  This is the second tandem that she has borrowed from us and took it to take part in a Sportive. 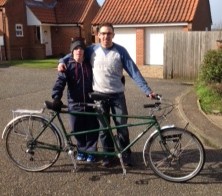 Jamie and his PA, Paul, collected our Norfolk based Kurton tandem in mid-March 2016.  He is going take part in the National Special Olympics. 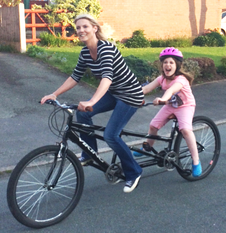 Lily and her Mum, Sharon, have previously borrowed a tag-along bike from us.  Now that she has grown she collected our Cheshire based Viking Saratoga tandem in mid-March 2016.  At the end of April she still hadn't got Lily to ride the tandem.
In mid-May, she wrote on our Facebook Group, "Success!  After a few weeks acclimatising to the gorgeous Viking tandem, we have been lucky enough to borrow from Brian in Cheshire, we finally took off this evening! Needless to say a great time was had by Lily, although we need to work on the pedalling smile emoticon, and she can't wait to go out again. Thank you so much, it was wonderful to be able to go out on a bike with her and see how much she enjoyed it."

Kelly and her husband, David, collected our Cheshire based Burley Samba tandem in mid-March 2016.  More details and a photo are to follow.