Samuel and Thomas from Warwick 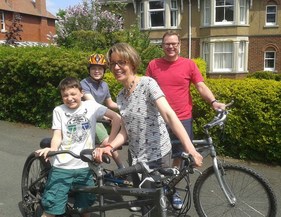 Twins Thomas and Samuel and their parents from Warwick collected our Gloucestershire based Viking Sararoga and Dawes Discovery tandems at the end of May 2016.

John and his wife collected our Shropshire based Viking Companion tandem at the end of May 2016. 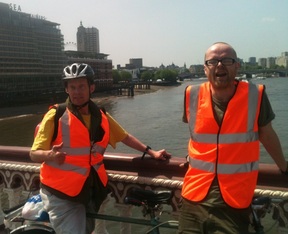 Michael and Raine collected our London based Wakefield tandem in the latter half of May 2016.  They have borrowed a tandem from us before.  He wrote on our Facebook site that he had been in "Regent's Park with the Wakefield tandem. Great to be on the saddle again". 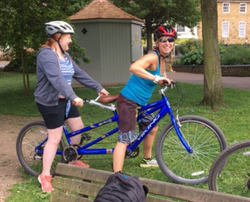 Jessie and Julia collected our Hertfordshire based Viking Regency tandem in the latter half of May 2016.  Julia borrowed a tandem from us before for a different Stoker.

PJ from near Worthing 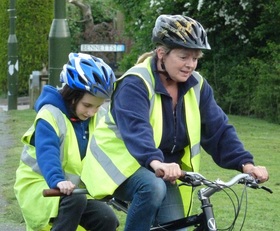 PJ and his Mum, Mary, collected one of our Sussex based Viking Saratoga tandems in the latter half of May 2016.  Charlie, our Helper, wrote on Facebook, "We got a lovely giggle from PJ when coasting down hill.  Once he has the hang of keeping feet on pedals he will be fine."
The next day, Mary reported that PJ had mastered pedalling.
In September they had bought their own tandem.

Riley and his Mum, Kaylee, are the first borrowers of our newly donated Trek Double Track tandem in May 2016.  More details and a photo are to follow.

David from the North-East 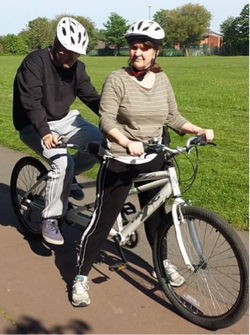 David and his Mum, Joyce, collected our North-East based Viking Timbertrail tandem in mid-May 2016.  Joyce wrote, "He loves it and goes round the park almost every night after college." 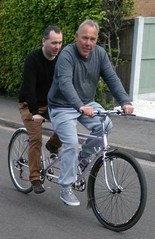 Chris and Peter collected our Cheshire based Columbia tandem in mid-May 2016.  Chris wrote on return of the tandem in late September, "Thanks very much for the loan of the bike. Me and my dad had a great time riding along the coastal paths of Wales and the Wirral this summer". 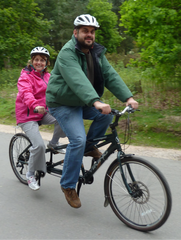 Barbara's Son, Rob, collected one of Ruth's Gargrave based Viking tandem in mid-May 2016 for their holiday.  She wrote in mid-June, "I had a brilliant time riding behind my son. He was an excellent captain as he is tall and strong so could hold the bike steady whilst I got on. I have very little experience of riding a bike and my MS affects my ability to pedal well with my left leg and my balance can be dodgy! Having the tandem meant that I could ride with the rest of the family on a holiday. It was wonderful and I have been telling my friends about your charity. I will also mention it to my neurophysio at a Leeds hospital when I next see her." 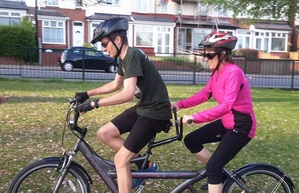 Sally collected our Shropshire based Barracuda California tandem in mid-May 2016.  Ray, our Helper there, said on our Facebook site, "Sally had a tandem in the family as a child and had her interest in cycling rekindled recently when she hired a tandem to ride on the Mensal Trail with her two boys. Sally says, 'Thanks very much for the tandem loan. We have had a fun afternoon and made some short local trips between homework'. Peter (her son) is piloting". 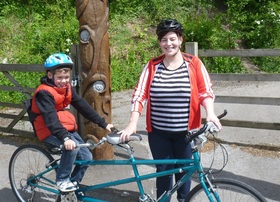 Findlay and his Mum, Donna-Marie, are the first Borrowers of our Lancashire based Why Kiddyback tandem.  They have had it since mid-May 2016.  Carole, the wife of our Lancashire Helper, David, wrote on our Facebook site, "I'd like to share the story of Fin and his mum, Donna. Donna does not drive so came to Leyland by Bus and walked the mile to us, she really did 'go that extra mile'; what a positive person and Fin is such a nice lad. He couldn't stop laughing when David took him for his first ride on the Why Bikes Tandem.
This is what Donna told us, 'I came across a link to Charlotte's Tandems whilst researching support and advice on cycling equipment suitable for Fin's needs, followed that to the contact page and applied. I didn't expect such a quick response, virtually instant replies from Alex and David. After meeting Carole and David who gave me the background story of Charlotte's Tandems, I felt inspired by how much of a change something simple; which a lot of us take for granted, can be for children with additional needs. To see my son's delight at going on a bicycle (which he took to like a duck to water) was lovely and emotional. Both Findlay and I are incredibly excited at the prospect of riding a Tandem.'"  See our Facebook site for a video of the first rides. 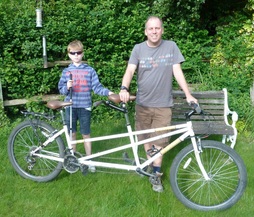 Freddy and his Dad, Nick, have borrowed one of our Sussex based Viking Companion tandems for the second time in mid-May 2016.  Freddy is going to do his Bikeability on the tandem and they hope to take the tandem to France on holiday. 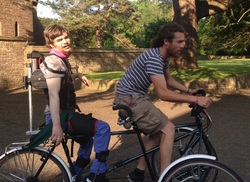 Marchant's Mum, Sue, collected our Gloucestershire Newton Dawes tandem trike (nicknamed "Daisy The Beast" by the previous Borrower) in mid-May 2016.  Marchant is severely disabled with CP and will ride it using one of our backrests with side supports.  He and his friend Luke started riding it in early June after his Mum had the backrest modified to keep him upright. 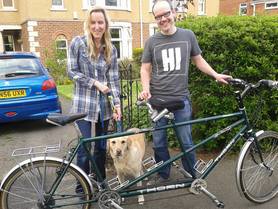 Jayne, John and Ginty collected our Gloucestershire based Thorn Adventure tandem in mid-May 2016.  They hope to ride with friends that have also borrowed a tandem from us. 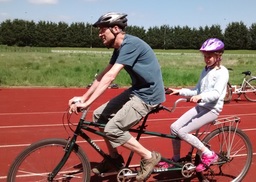 Eve's Dad, Nick, collected one of our Gloucestershire based Thorn Kiddyback tandems in mid-May 2016.  Here they are enjoying riding the tandem at the opening of a Family Cycling Centre in Bristol, where they told lots of people about us. Emma and her Pilot, Louise, collected our London based Konekt tandem in early May 2016. 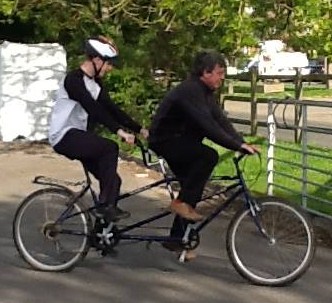 Alex and his family collected our Sussex based Ammaco Two-Some tandem at the very start of May 2016.  Ths is their second hire from us.