Tom from near Woking

Tom and his Dad, David, collected one of our Surrey based Dawes Galaxy tandems at the end of May 2017.  More details and a photo are to follow. 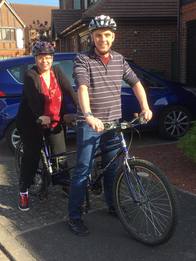 Natasha and her husband, Doug, collected our Oxford based Viking Timberwolf tandem at the very end of May 2017.  Natasha said on our Facebook group, "Trying something new this summer! Thanks to Charlotte's Tandems for the loan of the bike, and my husband for sorting everything for me!" 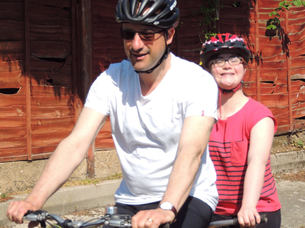 Charlotte and her Dad, Steven, collected our Hertfordshire based Dawes Toucan tandem in late May 2017.  Steve says that they are "loving it".

Leah's Dad, Barry, collected our Cheshire based Viking Pennine Trail tandem in late May 2017.  This is the second time that they have borrowed a tandem from us. 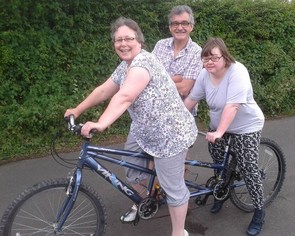 Louise and her Carers, Val and Mark, collected one of our Dursley based Viking Salerno tandems in late 2017.  They are going to ride it along the newcycle track from Weston to Bream. 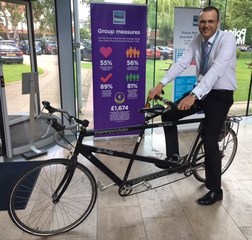 Wayne's Dad collected our huge Gloucestershire based Cannondale tandem in late May 2017.  Wayne is taking part in a long distance ride and this is the second time that he has borrowed the Cannondale from us.  Wayne says about the photo, "Something is missing". 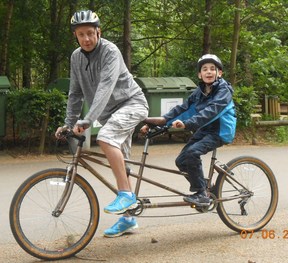 "L" and his parents, Derek and Veronica collected our Norfolk based Viking Regency tandem in late May 2017.  Veronica wrote in mid-June, "We have ridden around our local village but also taken it to Centre Parcs at Elveden Forest, Suffolk, where we managed to get out on our bikes despite the showery weather. It is the first time we can remember going on a family bike ride! It wasn't a long ride, but it was still enjoyed and valued by us. L is still getting used to being on something with two wheels. He is used to his trike but it is good job that Dad is very confident on a bike".

Elliot from The Wirral 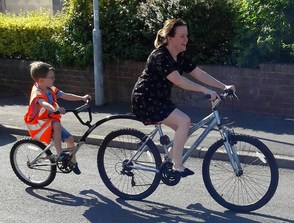 Elliot and his Mum and Sister collected one of our Cheshire based tag-along bikes in late May 2017.  They are going to ride it for the Bloodwise #WirralBikeathon. 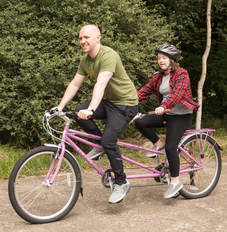 Clare and her Dad, Paul, collected our Co Donegal based Viking Pink Link tandem in late May 2017.  Here she is riding with her brother. 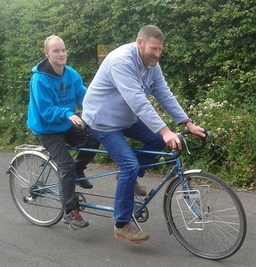 Ben and his parents, Susie and Mike, swapped our huge, Dursley based, Cannondale road tandem for one of our Richmond tandems in mid-May 2017. 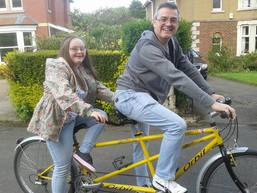 Ellie-Megan and her Dad, Alan, collected our Dursley based Orgit Gemini in mid-May 2017.  She is going to race away from her brothers on it!  Alan added photos to our Facebook site of their next ride and that "Ellie-Megan is still buzzing." 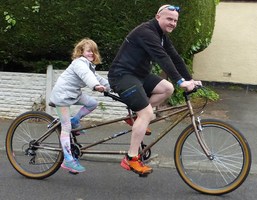 Brian, our Cheshire Helper, wrote on our Facebook group in mid-May 2017, "Enya and her Dad, Richard, collected the Cheshire based Viking Pennine Trail tandem today. Enya's Mum, Pat, said they will now be able to pedal out as a family along the N. Wales coast cycle path. Richard is a keen cyclist so hopefully we'll see lots of action shots here. Enya did not want to take off the Charlotte's Tandems HiViz tabard on the drive home." 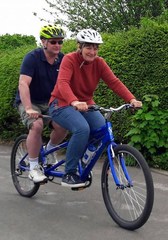 Alan and Jenny got our previously Cheshire based Viking Regency tandem in mid-May 2017.  Our Cheshire Helper, Brian, wrote on our Facebook group that Alan, "is a guy who has been VI since birth yet cycled as a kid, gained a Degree, is a Radio DJ and has a zest for life and particularly tandem cycling." 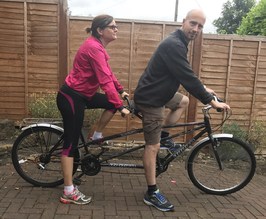 Jo and her family got our newly donated Shimano tandem in mid-May 2017.  She plans to cycle with a friend in a triathlon.  She wrote, "We had a great first ride on Sunday with my guide dog chasing after us. Thanks very much indeed." 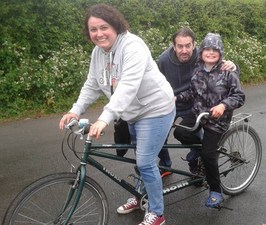 George and his parents collected one of our Gloucestershire based Thorn Kiddyback tandems in mid-May 2017.  They are going to ride it with Lenny and Faye, who have one of our other tandems. 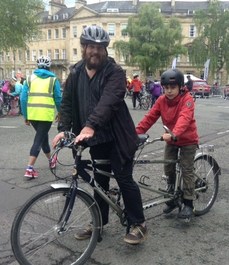 Tobi's Dad, Rob, and Sister collected our Gloucestershire based KHS Alite in mid-May 2017.  Here they are at the Bath Tour Family Ride.  Rob added, "Tobi would not have been able to take part in this event if it was not for the use of the tandem. We were able to get lots of cycle route maps from a stall there and he is planning the next trip." 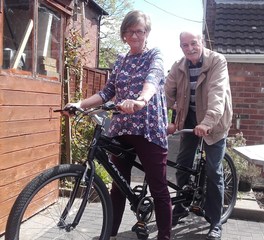 Bruce and Jill collected our Staffordshire based Viking Saratoga in early May 2017. 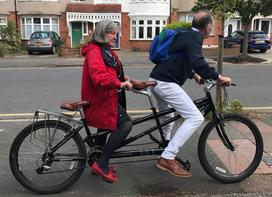 Ena and George collected our London based Viking Saratoga in early May 2017.