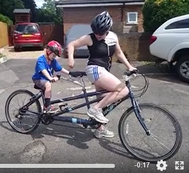 Jasper and his Mum, Lisa, collected one of our Surrey based Viking tandems at the end of May 2018.  She added a video to our Facebook site at the start of June and wrote, "Very enthusiastic "Go!" on our first attempt but Jasper keeps wriggling his feet out. Tried bolting his shoes to pedals but actually the cranks are too long. Looks like they are 175mm, when kids his size normally have 120! I love the feel of the bike though - very smooth."

Ryan and his Mum, Felicity, collected our Salisbury based Viking Regency tandem in May 2018.  More details and a photo are to follow. 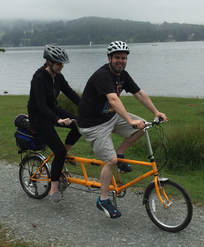 Leah and her Mum, Lynsey, collected one of our Gargrave based KHS Sausage Dog tandems at the end of May 2018.  Lynsey wrote at the start of June, "We have got a tandem for Leah and she loves it. We have been on a bike ride today at Lake Windermere: we even stopped for a picnic! I will continue to keep you up to date with our outings! Thank you so much for making biking possible for our family." 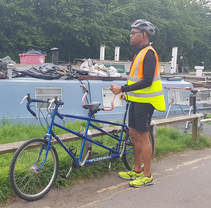 Diran has our London based Thorn Discovery tandem and said in late May 2018, "Attached is a photo from our first ride out. It was just over a week ago and we went up around the canal in Tottenham.  Thanks again, looking forward to a duathlon later in the year!" 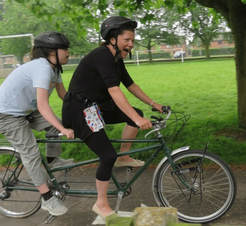 Lewis and his Teacher, Claire, collected our Norfolk based "Kurton" tandem in late May 2018.  Claire wrote a in mid-May, "Please find attached a photo of us using the bike. I look terrified ha ha....  We have had such fun using the bike in class during leisure times. Other students in school have used it too." 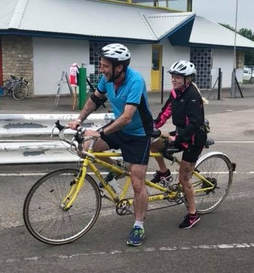 Tracey and her husband collected our Dursley based Co-Motion Sky Capp "Bouncy Bee" tandem in late May 2018.  She plans to ride it with her VI Running Guide, Tim, in a Duathlon.  She wrote at the end of May, "First of all, many, many thanks for the loan of Bouncy Bee.  It’s been brilliant, a real buzz for me. As discussed in a earlier email we have two more pairs of people who are also entering the Duathlon, alongside myself and Tim."  See a video of them in action on our Facebook site.

Martin and his friend Chris collected our Shropshire based Dawes Super Galaxy tandem in late May 2018.  Our Helper, Ray, wrote, soon after on our Facebook site, "He'd come up from Sussex to ride with his friend Chris from Bridgnorth. Martin says, 'I’ve included a couple of pics of us on the tandem in Bridgnorth.  We’ve done about 55 miles in all. A great bike and great cycling here in Shropshire. Thanks.' Thankfully they missed the thunderstorms!"

Larry and his Dad, Steven, collected our Shropshire based Buddy Bike in May 2018.  Helper Ray said on our Facebook site that Steven said, "We’ve not been out on it much yet… but where we have he seems happy. Hopefully we can get a 20 minute or so ride under our belt soon." 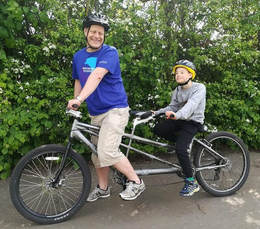 Fergus and his Parents, Phil and Cat, collected our Oxford based Viking Saratoga tandem in mid-May 2018.  Cat wrote on our Facebook site, "A lovely afternoon cycling round the park. Thank you so much for the loan of the bike, Charlotte's Tandems. Fergus loves it."

Albert's Dad, Dave, collected our South London based Viking Saratoga tandem in early May 2018.  More details and a photo are to follow. 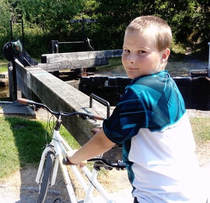 Sam and his Mum, Louise, collected one of our Lancashire based Viking Companion tandems in early May 2018.  Our Helper, David, wrote on our Facebook site in early July, "Living in Chorley they are very close to the Leeds Liverpool Canal. The canal tow path is in reasonable condition and very dry at the moment, so an ideal place to ride the tandem. Sam also likes to stop at the local ice-cream parlour for an occasional cornet."
Louise added in October, "We have had so much fun using the tandem.  Sam has poor motor control & without the tandem we wouldn't be able to get out & about together on the bike. We have had many adventures on the bike, long cycles on along the canal, completed the Guild Wheel.  It has boosted Sam's confidence, self esteem & he has improved his mental health too.  We are looking into buying our own tandem on eBay, but have been unsuccessful so far."

Sam collected our Oxford based Viking Timberwolf tandem in early May 2018.  More details and a photo are to follow. 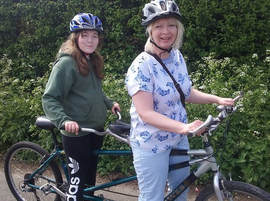 Hana and her Mum, Tracey, collected one of our Dursley based Dawes Discovery tandems in early May 2018. 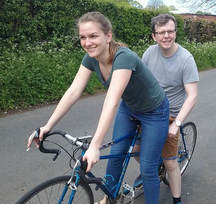 Simon and his girlfriend, Charlotte, collected our Dursley based blue Orbit tandem in early May 2018.  They cycled home to Gloucester on it. 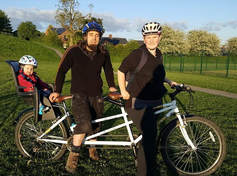 Damien, Rachel and Zady collected our Shropshire based Viking Companion tandem in early May 2018.  Helper Ray said on our Facebook site, "Things are going fine with the bike - just need to get used to riding again"

Alex and his Mum, Fiona, collected our Suffolk based Viking Regency tandem at the start of May 2018.  More details and a photo are to follow.

Nige swapped our North Wales based Columbia tandem for the Viking Ascot in early May 2018.  More details and a photo are to follow.