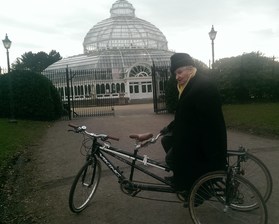 Brian's daughter Frankie collected our Viking Saratoga based tandem trike at the very end of December 2016.  Here is Brian outside the Palm House in Sefton Park.

Arthur from near Stroud

Arthur's Dad, Jim, collected our Gloucestershire based Globetrotter tandem at the end of Decmber 2016.  Arthur had got too big for Jim to carry on the back of his solo bike, so wanted to use a tandem for extra legroom for Arthur.  Unfortunately they didn't use it.

Sasha from near Loughborough 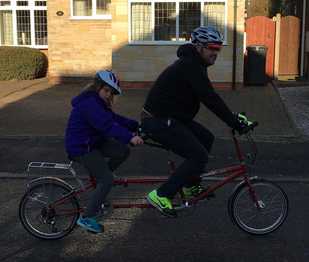 Sasha and her Dad, Mat, collected our Leicester based Bike Friday tandem at the end of 2016.  Mat posted a video of them in action on their first ride, on our Facebook site. He wrote, "We rode maybe half a mile to the local swimming pool, had a swim and rode back, with Sasha's younger brother riding behind keeping an eye on her.
I'm surprised how well Sasha has taken to it. Her balance was amazing." 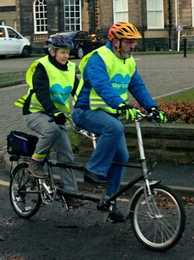 Maria and John collected one of our Yorkshire based KHS Sausage Dog tandems in mid-December 2016.  John wrote on our Facebook site, "Today was a familiarity ride, up at the Beckett Park Campus of Leeds Beckett University and it went very well. We hope to get out a lot in the next few weeks, weather permitting. Thanks you Charlotte's Tandems for the new lease of life." 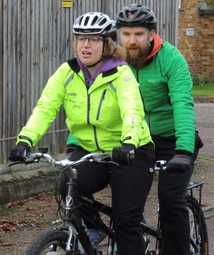 Martin and his Partner, Charlie, collected our Hertfordshire based Viking Valhalla tandem in mid-December 2016.  They took it back home with them on the train.  Charlie wrote, "We had another practice on Wednesday night in our local park and are getting better at starting. We can now do it without needing a kerb so that's a step forward (for me anyway!).  Also had a bit of a play with the gears and going round some corners! We are going to practice another couple of times in the park and then try and take it out on some quiet local roads to see how we do with junctions and starting quickly at lights." 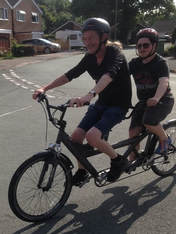 Chris collected our West Midlands based Claud Butler tandem in mid-December 2016.  On our Facebook site he wrote, "My first experience of riding a tandem was an odd feeling due to the lack of control. But, it was nice to be able to go cycling again. I mostly cycled round the Shrewsbury cycle routes and the Quarry Park." 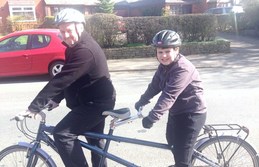 James and his family collected one of our Lancashire based tandems at the start of December 2016.  This is the second tandem that they have borrowed from us. 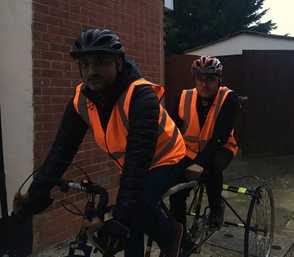 Ravi and his Brother, Mohan, collected our South-East based Howe Tandem Trike in early December 2016.  He wrote, "it was my brother's first time on a bike in 9 years! He really loved it and is looking forward to the next trip although it was quite scary going round corners on it!" 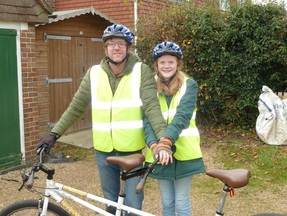 Letty and her Dad, Hamish, collected one of our Sussex based Viking Companions at the end of November 2016. They are going to use it on the school run.

Rhys from near Chippenham 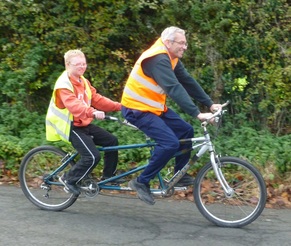 Rhys and his Dad, Tim, collected one of our Dursley based Dawes Discovery tandems in mid-November 2016.  Rhys was very shy but by the big grins he had whilst riding it we could tell that he loved it.

Faye from The Wirral

Faye and her parents collected our Cheshire based Viking Regency tandem in early November 2016.  It is the third bike that they have borrowed from us.  Elaine wrote on our Facebook site, "Faye and Mammy, enjoying a very cold but fun, New Year's bike ride along the seafront at New Brighton."

Ned and his Mum, Julie, collected our Norfolk based Viking Pennine Trail from new Helper, Jenny, in early November 2016.  Jenny said that they, "tried it and loved it and took it away." She also said "I felt really pleased because they were clearly so pleased." More details and a photo are to follow. 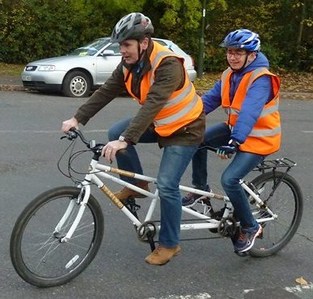 James and his parents collected one of our Sussex based Viking Companion tandem at the start of November 2016.  James' Mum, Diane, said that more photos will appear on our Facebook site.

Ruby's Mum, Sara, collected our Hertfordshire based Bob Jackson Kiddyback tandem at the start of November 2016.  Unfortunately Ruby wouldn't ride it, so they returned it in December. 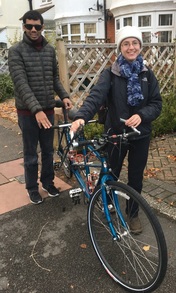 Naqi and Anne-Marie collected our London based Trek T50 tandem at the start of November 2016.

Jason and his friend, Robert, borrowed our Northern Ireland based Viking Valhalla in November and December 2016.  Unfortunately they didn't ride it much.