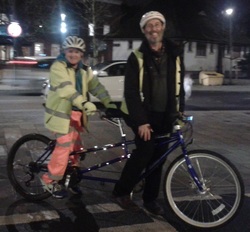 Matt and his friends, Colin and Marion, borrowed our London based Konnekt2 tandem in December 2015.  Marion wrote, "Thank you so much to Jim for lending us the tandem, so we could participate with our visually impaired friend, Matt, in the festive lights cycle ride organised by Lambeth Council.
It was so much fun! About a hundred people took part, adults and children, some using adapted bikes, a very inclusive event. We met some wonderful people from "Wheels for well being". We cycled round various parts of Lambeth, entertained by street artists, fire eaters and fireworks, and celebrated with mulled wine provided by Lambeth at the end of the ride. Matt thoroughly enjoyed himself and felt safe at the back of the tandem. he would not have been able to do this on his own." 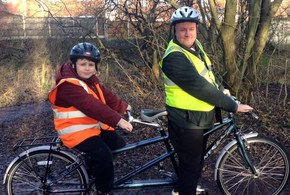 James and his Parents, Janet and Steve, are the first borrowers of our Lancashire based Dawes Duet tandem: Helper David has converted it to suit very short stokers.  They collected it in mid-December 2015. 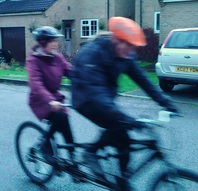 Carole and her husband collected our Hertforshire based Viking Valhalla tandem in mid-December 2015.  We hope to get a better photo when they slow down a bit.

Paul from Sutton in Ashfield 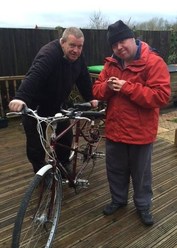 Paul's brother, Martin, collected our Shropshire based Bob Jackson tandem trike in mid-December 2015.  He wrote soon after, "We are familiarising ourselves with the bike although Paul is being his usual unenthusiastic self.... He will get there, eh?" 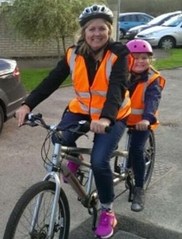 Lorna and her Mum, Andrea, collected our Ipswich based Ammaco tandem in mid-November 2015. She wrote that day, "It already has been better than I could have hoped. Lorna was great on the bike she absolutely loved it more than any computer game! We went for a bike ride with her friend and she sang all the way home. I cannot thank you enough for this opportunity and experience! X"
She has just added about John, "The whole organisation of collecting and directions and communication have been excellent". 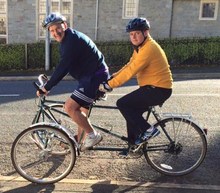 Steve's friends, Paul and Kim, collected our Gloucestershire based Newton Dawes tandem trike in mid-November.  Steve has borrowed this wonderful machine before and plans to do some long rides on it.  Apparently, the tandem is "fabulous and gets lots of attention"

Austin from the Middlesborough 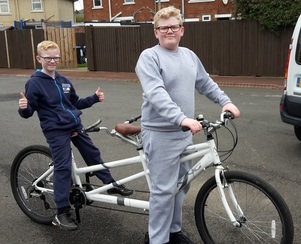 Austin and his brother Aiden collected our North East Viking Timberland tandem in mid-November 2015.  Helper Mike stated, "He is so happy to get the opportunity to ride with his brother."  Their Mum, Tina, wrote in mid-December, "They are loving the tandem". 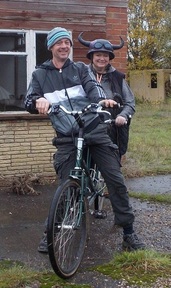 Lorna and her partner, Dave, collected our Dursley based Thorn Adventure tandem at the start of November 2015.  Lorna wrote, "This is our first ride on the tandem.  When Dave said that I could borrow his mother's helmet, I didn't envisage this." 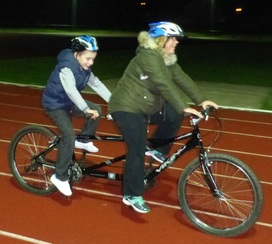 Our Cheshire Helper, Brian, took some of his tandems to a Tandem Riding Taster Event organised by Brio Leisure in late October 2015.  For full details, see here. and for a newspaper article about it, see here.
Michelle, Dylan's Mum, wrote, "Dylan and I had fun. Thank you very much for the opportunity".  One of the orgainisers wrote, "There was a blind lady and her sighted husband; a boy of about 10 and his Mum; and another boy of 13, who had autism, and his parents. All did several laps and really enjoyed themselves – it was great to see the children’s positive reaction and the delight on the parents’ faces. The older couple were really happy too." 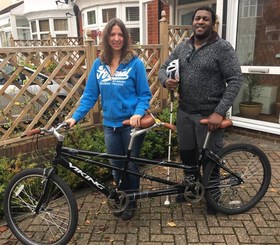 Stephen and his Fiancee, Sarah, collected our London based Viking Saratoga in late-October 2015. 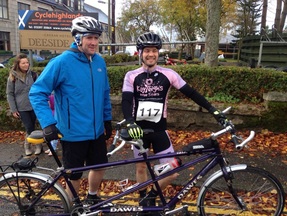 Jamie from Leeds and his old school friend, Stephen, collected our Lancashire based Dawes Kalantar tandem in mid-October 2015. Jamie has written, "I’m delighted to say that we completed our 63 mile cycle in a mere six and a half hours. Despite now being unable to sit down the experience was great. The charity we were cycling for – Kayleigh’s Wee Stars raised over £14,000 on the day. About 200 cyclists took part but we’re proud to say we were the only tandem on the field. Thank you again for lending us the bike. My Fiancé, Caroline, and I are now planning to take it out at weekends about the Yorkshire Dales until it’s time to return it." 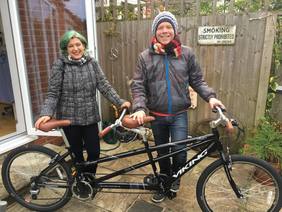 Louena and her Boyfriend borrowed our London based Viking Saratoga whilst they were holidaying in London in mid-October 2015.  Louena wrote, "Everything was wonderful. Jim and his wife were so kind and generous people. They were quick to offer us a cup of tea and even to suggest places we might enjoy visiting. We were so thankful to have the oppertunity to borrow a tandem from them. You have a wonderful organization and I am so happy and thankful to have run accross it. The very best of wishes."

Valentine and Deanna from Seaford, Sussex 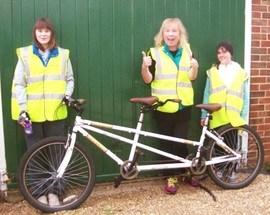 Sisters Valentine and Deanna and their Carer, Cindy, collected one of our Sussex based tandems in mid-October 2015.  Helper, Charlie, wrote "We got off to shaky start but soon got going and Valentine was happy to pedal along. Deanna also had a go and pedaled well. Hope the Tandem gets you all out together."

Jennifer and her boyfiend, Andrew, collected one of our Hertfordshire based Globetrotter tandems in the middle of October 2015.  She wrote, "Thank you so much for the loan. Even on the mini test ride we did, I found cycling easier than walking for me at the moment." 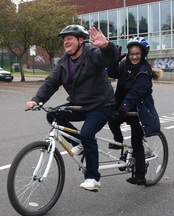 Focus, a charity in Birmingham, are collected four of our Shropshire based tandems in mid-October 2015.  They are two Dawes, a Viking Companion and our Buddy Bike.  They were used for an event in mid-October. Here the Viking tandem being enjoyed.

Stefan and his Mum, Louisa, collected our Yorkshire based Dawes Discovery tandem in the middle of October 2015.  Unfortunately Louisa nover got Stefan to ride the tandem, so they returned it. 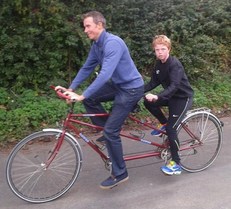 Jacob and his Dad collected our Gloucestershire based Dawes Backstreet tandem in the middle of October 2015.  Jacob was very excited and his Dad a bit nervous but they had a great test ride. 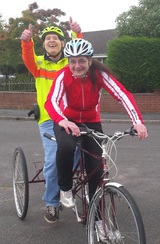 John and his Partner, Linda, collected our Shropshire based Bob Jackson tandem trike and a backrest at the start of October 2015.  Helper Ray said that they were very happy with it.  Linda said, "I'm over the moon how well John managed." 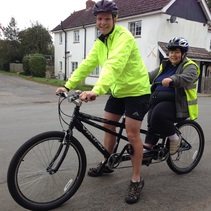 Carrie and her friend, Ewan, often borrow a tandem from us.  In early October 2015 it was the turn of Charlotte's own brand new Viking Saratoga tandem.  They found it a very comfortable ride and Carrie enjoyed the upright position and the foam grips on the BMX handlebars. 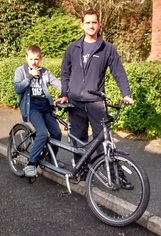 Owen and his Dad, Paul, collected our Midlands based Barracuda California tandem at the start of October 2015.  This is the third tandem that they have borrowed from us. 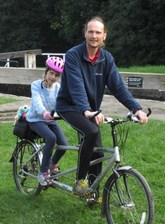 Sasha and her Dad, Phil, collected our Yorkshire based Orbit Unicorn 8 tandem at the start of October 2015.  Phil wrote a few days later, "Not just one ride, but three so far!  On Friday after school we did Kildwick-Bradley and back on the towpath, on Saturday we went to Gisburn Forest, and on Sunday we did 8 miles on the towpath from Saltaire.  It is a brilliant bike, many thanks to the charity for lending it to us. Sasha has hydrocephalus and is not able to ride a solo bike."

Laura from the Home Counties 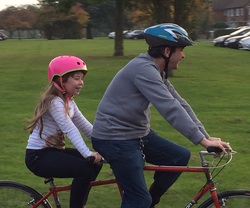 Laura's Dad, Paul, collected our Hertforshire based Bob Jackson Childback tandem at the start of October 2015.  They are its first borrowers.  He wrote soon after, "Many thanks for the great tandem! We have had numerous rides on it already, and we are absolutely loving the fact of going out on rides together.
It has given us some great Daddy and Daughter time, and in fact we have found it not that much slower cycling than taking the car!"
In mid-November he said that they have had lots of rides on it in all weathers.