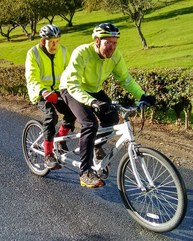 Ben and his son, Stephen, have our North-East based Viking Timbertrail tandem.

Tom from Much Wenlock 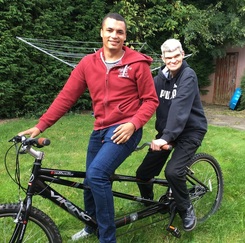 Tom's Carers collected one of our Shropshire based tandems at the end of September 2016.  Sophie, one of his Carers, wrote, "Tom absolutely loves it.  He's still getting the hang of it but has had so much fun riding it around the garden.  When he's more confident he will be out and about." 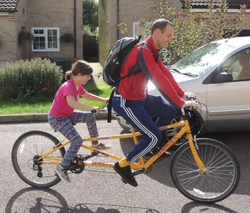 Cerian and her Dad, Ellis, collected our newly donated Hertfordshire based Dawes Toucan tandem in late September 2016.  They cycled it to the station, took it back to London and rode it home.
After borrowing this tandem they bought their own. 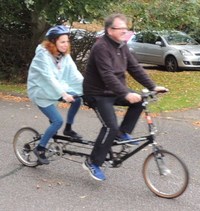 Angela and Alistair collected our newly donated Hertfordshire based Bike Friday Twos'day tandem in late September 2016.  As it splits into two they easily transported it home. 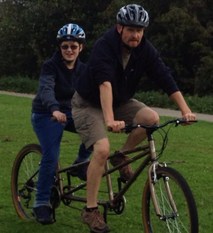 George and his family collected our Cheshire based Viking Pennine Trail tandem in late September 2016.  His Mum, Sharon, wrote on our Facebook site, "Hi, we just wanted to say a big thank you for the loan of our tandem. My son George is 13 years old and has cerebral palsy and is also autistic. This means that his balance and coordination are poor and because of this he struggles to ride a bike. He is absolutely loving being able to ride his confidence is growing daily. He has been out every chance he can and they have built up to doing 10 miles yesterday.  Thank you x" 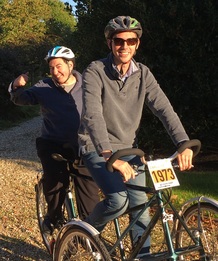 Tom's Dad collected our Dursley based Newton trike conversion of a Dawes Galaxy tandem.  Seb, Tom's younger brother wrote, "They had a great time on it and can't wait to get back on again tomorrow!" 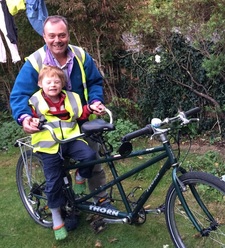 Henry's Dad, Phil, collected one of our Dursley based Thorn Kiddyback tandems in mid-September 2016.  He hopes to tow Henry's younger sister on a tag-along behind.  Phil wrote in early October, "He is very interested but also nervous, which is a common trait for him with new things. The main problem is keeping his feet on the pedals. I’m sure we will be successful but it may take a few more weeks yet." 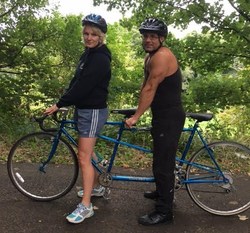 Adam's Sister and her family collected our newly donated Dursley based Blue Orbit tandem in mid-September 2016.  Laura, his girlfriend wrote that afterrnon on our Facebook site, "Our first practice was a giggle to say the least! Thank you Charlotte's Tandems for giving us the opportunity to get out there and enjoy the countryside!" 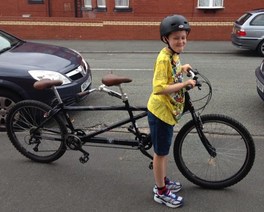 Logan's Mum, Graunya, collected one of our Cheshire based Viking tandems in mid-September 2016.  She said just after collection, on our Facebook site, "The photo shows Logan ready for his maiden voyage. Lovely ride along the prom. Thank you for giving him this opportunity to ride." 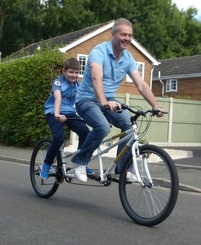 Brian, our Cheshire Helper wrote, "Here's Luke with Dad who collected today (mid-September 2016) the Cheshire-based Viking tandem which had been donated by funds from Dursley Running Club. Starting off, Luke was understandably nervous but came back all smiles. It helped that his Dad, Simon, used to race tandems" 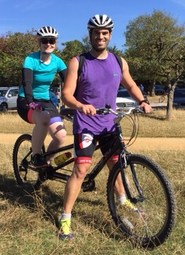 Jenny has collected a tandem from us for the second time.  This time it is our Hertfortshire based Viking in mid-September 2016.  She has written, "Thanks again for another loan. We took the tandem out this morning to Richmond Park for a lap on the road, then for a ride off-road too which was lovely on such a beautiful day.  It's great how much easier I find cycling than walking. :)  Here's a photo of myself and my boyfriend, Andrew this morning." 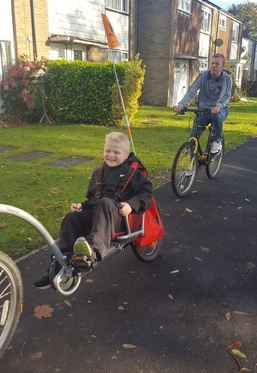 Owen and his parents have our Northants based Weehoo tag-along in mid-September 2016.  His Mum, Corrine, said in late October, "I was a little unsteady but am gaining confidence." She sent some photos in mid-November showing him and his brothers enjoying the Autumnal sunshine together on their bikes.  See them on our Facebook site. 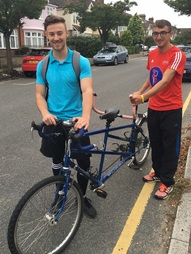 Ryan and Jay collected our London based Thorn Discovery tandem at the start of September 2016.  They plan to ride from Edinburgh to London. 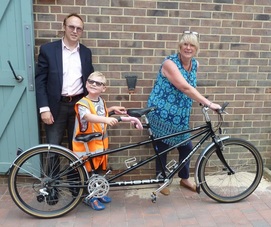 Leo and his family are the first Borrowers of the Sussex based Thorn Kiddyback that we bought recently. 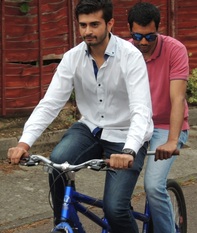 Naqi collected our Hertfordshire based Viking Regency tandem at the start of September 2016.

Zoe and her family collected our Lancashire based Dawes Duet Kiddyback tandem at the start of September 2016.  More details and a photo are to follow.