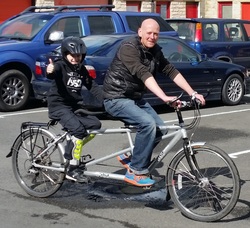 Samuel and his family collected our Yorkshire based Orbit Unicorn tandem at the very end of April 2016.  His Mum, Jo, wrote, "Thank You, Jamie, for all of your help on Saturday, it really gave us a good head start! I thought you would like to see photos from Saturday and also of our maiden voyage on the Trans-Pennine Trail the following day!"
"Samuel was so excited, we decided to get straight into it - cycling from Dunsford Bridge to Penistone and back - 12 miles!! Thanks again, we'll send you some more snaps as we go!"
They have posted several photos on our Facebook site. 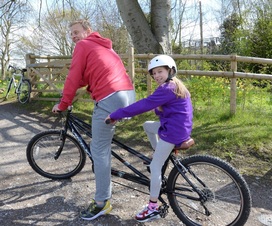 Evie and her Dad, Darren, collected our Shropshire based Viking Valhalla tandem at the end of April 2016.  Our Helper, Ray, reported on Facebook that "Evie says she was very nervous and anxious on her way in the car but, after a nice safe ride down my lane with me then Dad, all her worries disappeared. Evie said after her happy rides she wants to go out on the tandem every day! They look forward to cycling along the Smestow Valley cycle path near their home and will keep us posted."  Darren then added, "We had to stop on our way home and show Grandpa and Nanny, that led to a few miles in the saddle around Cosford air base. Evie (and me if I'm honest) loved every minute."

Kelly and her Husband, Ben, collected our brand new Norfolk based Viking Pennine Trail tandem in late April 2016.  Unfortunately they didn't ride it. 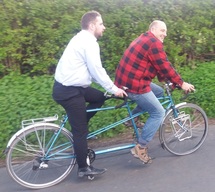 Marc and David collected one of our Gloucestershire based Richmond tandems in late April 2016.  They were going to use it for a sponsored ride but didn't in the end. 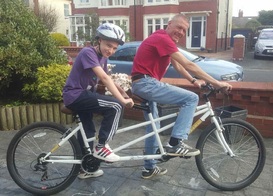 Jack's Mum Janice, collected one of our Lancashire based Viking Companion tandems in late April 2016. 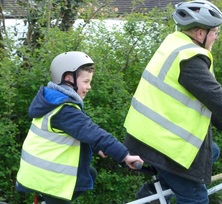 Tommie and his Dad, Ray, collected one of our Sussex based Viking Companion tandems in the latter half of April 2016.  Ray said on our Facebook site, "Tommie enjoyed his first ever ride on a Tandem, very happy he was too.  Tommie has poor balance and doesn't see too well, so this is just what he needs. Thank you for the loan, a really great idea." 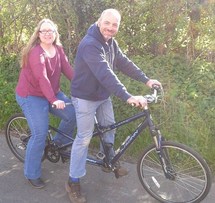 Nichola and her Husband collected our Gloucestershire based Schwinn Sierra tandem in the latter half of April 2016. 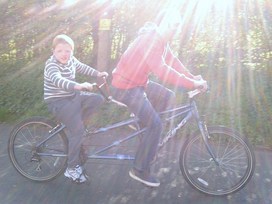 Chrissie and his Dad, Jon, collected Sadie, one of our Gloucestershire based Viking Salerno tandems in the latter half of April 2016.  More photos and videos of them can be found on our Facebook Group.  They bought their own tandem after borrowing ours. 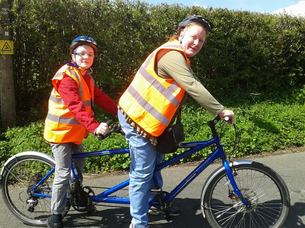 Alexander and his Mum, Alison, collected one of our Gloucestershire based Dawes Discovery tandems in the latter half of April 2016.  The next day Alison wrote, "Thanks so much for all of your help and patience with both Alexander and myself yesterday. Alexander is really thrilled by how fast he can go and how much difference his pedalling makes to the overall speed, although we are yet to try any challenging hills."
"It was really good that you gave Alexander the chance to be involved and use the spanner." "He often shys away from trying anything using tools, and it also meant that he was willing to give me a hand putting the bike back together today." 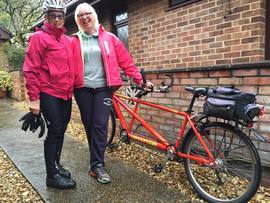 Mandy and her friend Penny collected our Isle of Wight based Cannondale tandem in the second half of April 2016.  They are going to ride it in a sponsored cycle ride.  ﻿Click here﻿ for details. 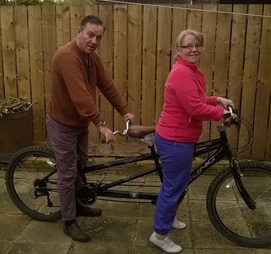 Stephen got our North-East based Viking Valhalla tandem in the second half of April 2016. 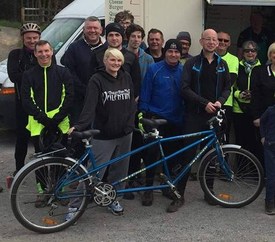 Emily and her friend, Eoin, collected our North-East based Micmo tandem in the second half of April 2016.  She took part in a 22 mile sponsored ride and said, "What an amazing day!" 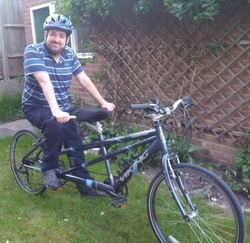 Tim and his wife collected our Surrey based Viking Salerno tandem in the second half of April 2016. 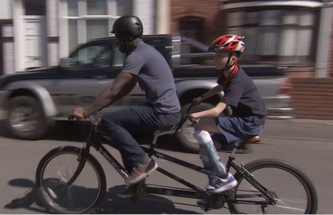 Oscar borrowed one of our Shropshire based Viking tandems in the second half of April 2016.  Watch this space for some exciting news! 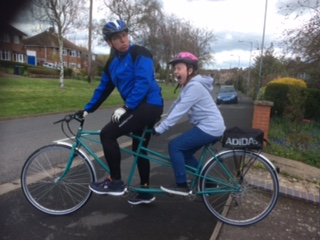 Hannah and her parents collected one of our East Midlands based tandems in mid-April 2016.  Her Mum wrote that here are "Paul and Hannah on their first ride together on the tandem.  It was a complete success and as you can see, Hannah has a smile on her face.  Thank you so much again for the loan of this bike.  The freedom it will give us, and the pleasure it will give us, cannot be measured." 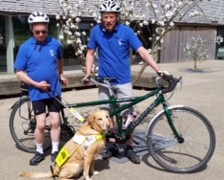 Phillip collected our Lancashire based Dawes Galaxy tandem in mid-April 2016.  Here he is with his Pilot, Mick, and Guide Dog, Clover, getting ready for their "Tandem Challenge".

Caroline, James and their daughter collected our Hertfordshire based Viking Valhalla tandem in mid-April 2016.  More details are to follow. 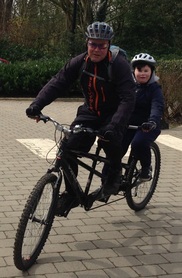 Christian and his Dad, Damian, collected our Northern Ireland based Viking tandem in mid-April 2016.  Damian wrote on our Facebook Group, "Big thank you to all at Charlotte’s Tandems for making this possible. Christian and myself had a fantastic day out on our first Tandem ride to Sir Thomas and Lady Dixon’s Park on the outskirts of Belfast. The weather was great and we also enjoyed a pleasant cycle along the River Lagan towpath.
Christian managed much better than I had hoped, and didn’t make it too hard for me with his balance, he was however a little reserved with his effort on the pedals! A little bit of practice will be required on that front.  Christian really enjoyed being out on the bike, the excitement of the speed and the sense of freedom with the wind on his face, and we are both looking forward to many more trips over the next two months and thanks again to all involved at Charlotte’s Tandems." 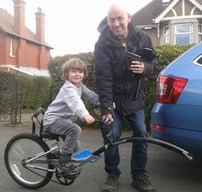 Rez and his parents collected our Gloucestershire based Canyon tag-along in mid-April 2016.

Frankie and his parents Manda and John have had our London based Thorn Kiddyback tandem and a backrest since early April 2016.  Manda said that even though he is deaf and blind, he loves riding it and enjoys having the rain splashing his face.  The photo and her comments have had the most "likes" on our Facebook Group. 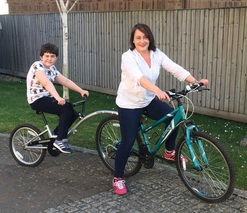 Charlie and his Mum, Michelle, have had our Hertfordshire based Ammaco tag-along bike since early April 2016.  It hasn't worked for them as he is too tall for it.  They had perviously borrowed a Viking tandem from us, but Micheele was too short for that. 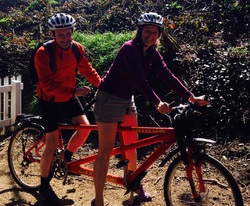 Red and his wife, Kate, are the first Borrowers of our Isle of Wight based Cannondale tandem.  They collected it at the start of April 2016 and used it on their holiday on the Island for a week. 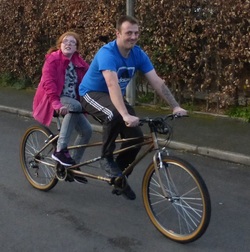 Erin and her Dad, Gary, collected our Cheshire based Viking Pennine Trail tandem at the start of April 2016.  Brian, our Helper there, wrote on our Facebook site, "Erin was definitely not sure about the tandem at first but soon had a smile for the camera after cycling round the block"
.

Amy's Dad, Stefan, collected our North-East based Pennine Trail tandem at the start of April 2016.  They have promissed a photo of Amy with the tandem.  Mike posted this photo to show how Stefan managed to get the tandem in a small Hatchback.  Stefan said at the end of April that Amy had been on the tandem and enjoyed it, but had a relapse with her MS.