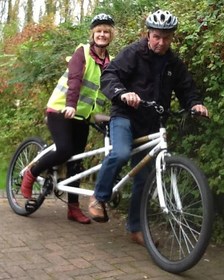 Mel and Dee collected our Shropshire based Viking Companion at the end of October 2016.  She reported that, "Just completed our first trip around Sandwell Nature Reserve!!! Most enjoyable trip in the autumn sunshine."  Mel has Parkinson's so they have been taking it in turns up front. 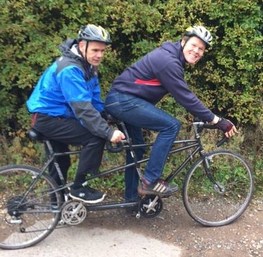 Martin collected our Shropshire based Dawes Galaxy tandem in late October 2016.  He said in early November, "My pilot is Trev and I am the Stoker, as I am severely visually impaired.  I am using the bike to train for a triathlon in April 2017.  We ride 18 kilometres, twice a week, weather permitting. The tandem is amazing to train on as it is nice and light". 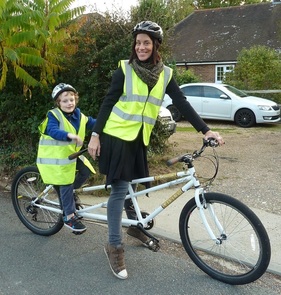 Charlie and his Mum, Emma, collected one of our Sussex based Viking Companion tandems in late October 2016. After their test ride they were going to ride along the Brighton seafront.

Steve from The Wirral 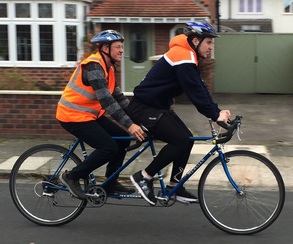 Steve and his wife collected our Wirral based Mercian tandem in late October 2016.  Here he is with his son, Jack. He has a group of four cycling friends, who he is going to put on trial as pilots. 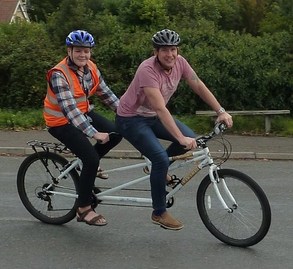 Cameron and his Dad, Brian, collected one of our Sussex based Viking Companion tandems in mid-October 2016, took it to France on holiday with them and rode 200 km and returned it at the end of October.

William and his Dad, Gareth, collected our Cheshire based Viking Pennine Trail tandem in mid-October 2016.  More details and a photo are to follow. 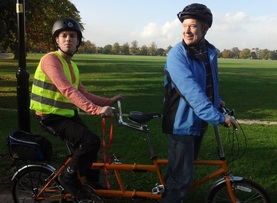 Cameron's Dad, James, collected one of our Gargrave based KHS Sausage Dog tandems in early October 2016.  James wrote on our Facebook site, "Cameron enjoying his first trip out on his Sausage Dog tandem, kindly loaned by Charlotte’s Tandems and JD Tandems - www.tandems.co.uk - (with a special thanks to Ruth for being so helpful). When he saw the bike, he couldn’t wait to get on, and loved every minute of this initial outing, humming with happiness all the way. We had a trip around Harrogate’s beautiful stray on a lovely October afternoon. Rocking backwards and forwards with enjoyment, he gave a whole new dimension to bike balance and dynamics, but we arrived home safely all the same. He then had a session admiring the parked bike, and is clearly keen to get out on it again. Maybe tomorrow!"  He has kept us up to date with other posts and photos on our Facebook site. 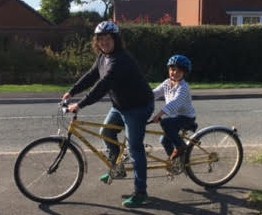 Ben collected our Dursley based Orbit Gemini tandem in early October 2016.  Sarah, his Mum, wrote sonn after, "We started off on the pavement but did a little road riding too - I just need to get used to regaining my balance when Ben quickly turns his head to look at cars coming up behind us. I did remind him "eyes forward!" a lot, but I don't think he understands that yet!
We are so excited about all the adventures we're going to have during the loan, thank you so much!" 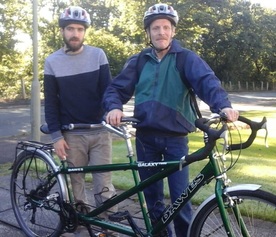 At the start of October 2016, David our Lancashire Helper wrote, "Adam and Alan, his father in law, collected the Lancashire based Dawes Galaxy Twin this morning. It was a real family affair coming to try out the bike, Alan's dad, Raymond brought them to Leyland. Following some very quick 'how to ride a Tandem' training, A and A rode down to the station to catch a train to Wigan. After the train journey they had an eight mile cycle to get home. Well done on your determination to get riding a bike. I hope the family relationship is still intact at the end of Sunday." 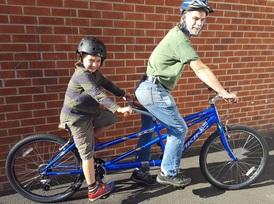 Samuel and his parents, Emma and Owen, collected our Salisbury based Viking Regency tandem at the very start of October 2016.  Here they are on their second ride.  On the first ride they shot off so fast that Emma couldn't get a photo.