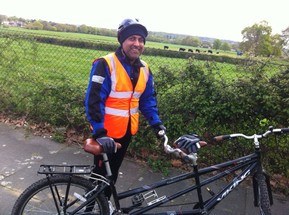 Bhavesh and Ketan have borrowed their second tandem from us.  This time it is our Hertfordshire based Viking Valhalla tandem and they collected it at the end of March 2017. 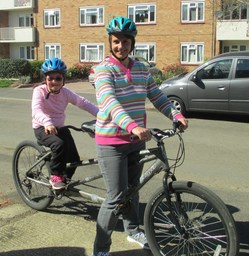 Lucy and her Mum, Marion, collected our Oxford based Viking Saratoga tandem in late March 2017. 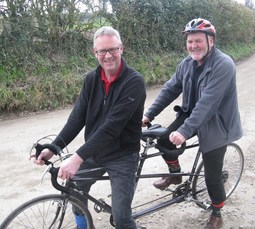 Ray, our Shropshire Helper, wrote on our Facebook site in mid-March 2017, "Martin and cycling friend Jim from Cookley, Kidderminster collected the Shropshire based Dawes Super Galaxy this morning. It's been about 5 months since Martin last rode a bike and due to his sight loss, the tandem is now providing an exciting new opportunity to get riding again" 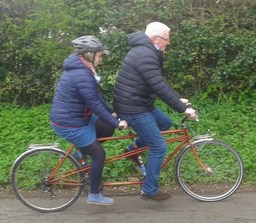 Ruth and Dave collected our Dursley based Globetrotter tandem in mid-March 2017.  More details are to follow.

Brian and Tara collected our South-East based Howe tandem trike in mid-March 2017.  Unfortunately they didn't ride it much. 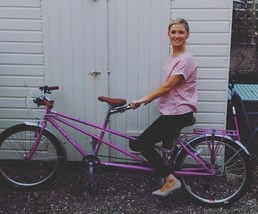 Nikki and her pilot, Ian, are the first Borrowers of Eve, our brand new Donegal based Viking Pink Link tandem and collected it in mid-March 2017.  Fred, our Donegal Helper, said that she will advertise us a lot on social media and in a newspaper or on the radio. 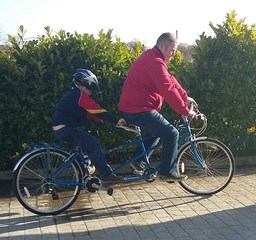 Michael and his Mum, Susan, are the first Borrowers of Adam, our brand new ​Donegal based Viking Valhalla hybrid tandem and collected it in mid-March 2017.  Fred, our Donegal Helper, said that "Susan was delighted".
Susan wrote, "Michael is pictured here enjoying the bike, took to it like a duck to water.  On his own bike with stabilisers we couldn't even get him to sit on saddle.

With tandem he is so different - well able to hop on and sit and saddle (we adjusted it to the lowest) - well able to keep hands on handlebars, enjoys moving, within 10 or 15 mins he gave up resisting and put the feet on the pedals and enjoyed the feet going round and round.  He knew we were all so delighted with him, he looked down himself to see the feet going round and round automatically from his Daddy pedalling.  This morning he was trying to get on bike to cycle first thing - we have him promised he can go again this evening.  It has a very calming effect." 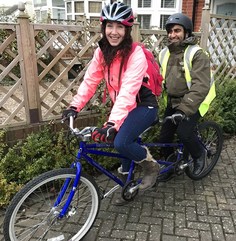 Ade and Lorna collected our London based Konnekt2 tandem in early March 2017.  More details are to follow.