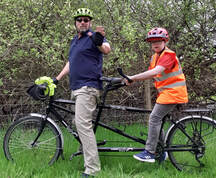 Harry and his Dad, Mark, collected our Hertfordshire based Orbit Routier Tour tandem at the end of March 2022.  Mark wrote soon after, "Steve was really helpful and gave me lots of tips. We have only been on a couple of short rides as the weather has not been good but we are going camping next week by the River Thames where we hope to explore a chunk of the Thames path."
At the start of May 2022, "We did a run up to his school today and back. Only about a 10 mile round trip but we are hoping to do this most days as long as the weather is good. Harry is really enjoying the freedom the tandem is giving him.  Many thanks to you and to the person who donated the tandem." 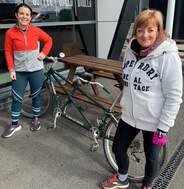 Teresa's friend, Natalie, collected our Gloucestershire based Thorn Voyager in late-March 2022.  They plan to ride it in a triathlon.  Teresa has borrowed a tandem from us previously.  Natalie said a fortnight later, "We’re getting on great with it, thanks." 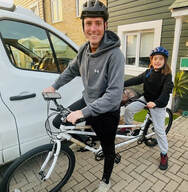 Louie and his Dad, Dan, collected our Hampshire based Viking Companion tandem in late-March 2022.  His Mum, Sarah, told our Facebook group "Louie did his first ride to the top of Ceaser's Camp in Fleet. He loved it.
Louie says, ‘it’s good it’s fun yeah'".

Martha and her Mum, Elisabeth, collected our Shropshire based Viking Companion tandem in mid-March 2022.  Apparently Martha wouldn't ride it.

Ewan and his Mum, Erica, collected our Norwich based Trek tandem in mid-March 2022.  Erica has borrowed from us before.  She said that Ewan loves it and rides it with his Dad, Jeremy.  They have promised some photos. 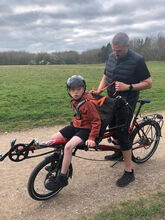 Seb and his Dad, Craig, collected our newly donated Sheffield based Hase Pino tandem in mid-March 2022.  Here they are on their frst ride.

Tracey and Christopher collected our Lincolnshire based KHS Sausage Dog tandem, Jeffrey, in mid-March 2022.  More details and a photo are to follow.

Henry and his Mum, Jackie, collected our Glasgow based Ammaco tag-along bike in mid-March 2022.  More details and a photo are to follow. 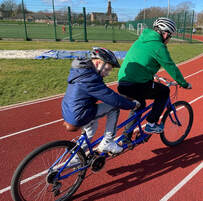 Jake and his parents, Will and Brooke, collected our Glasgow based Viking Regency tandem in early March 2022.  Brooke told our Facebook group, "Thank you so much for the loan of this tandem. First ride out around the track to get used to it." 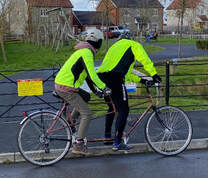 Sasha's carers, Adrian and Sally, collected our Gloucestershire based maroon Orbit tandem in early March 2022. Sally told our Facebook group later that week, "Sasha’s first ride on our borrowed tandem - they were going so fast it was hard to get photos ! Sasha is a real pro and we look forward to some longer trips. Enjoying the Somerset lanes.". 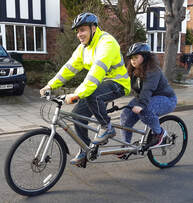 Lucy and her parents, Ann and David, collected our Lincolnshire based Ammaco tandem in early March 2022.  That day Ann wrote, "Lucy is gaining confidence..... quicker than we thought!" 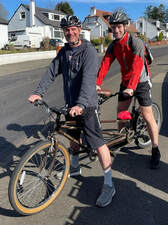 Stephen's friend, Andrew, collected our Glasgow based Viking Pennine Trail tandem in early March 2022.  Anrew wrote, "Just to let you know, Stephen & I managed to venture out on the tandem at the weekend, taking advantage of the rare sunshine.  We did a 17mile loop along the canal paths to a nice pub and enjoyed a beer in the sunshine.  This was both of our first time on a tandem, and Stephen’s first bike ride since his sight deteriorated.  After overcoming the initial wobble, we managed to synchronise our pedaling and got our communication down to a fine art!  We really enjoyed the ride, and the social aspect of riding together was brilliant!
Thanks so much for the amazing service you provide, Stephen & I are looking forward to many more trips over the next couple of months.  We will certainly spread the word about Charlotte’s Tandems!"

Judith and her husband, Ian, collected our Hertfordshire based Bike Twosday tandem at the start of March 2022.  Here they are on their test ride. 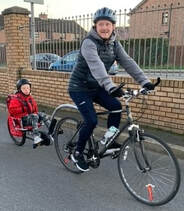 Jack and his Mum, Shauneen, are the first Borrowers of our Northern Ireland based Weehoo tag-along.  They collected it at the start of March 2022.  The next day Hauneen wrote, "Here’s Jack and his Dad on their first outing today in sunny Belfast. Short one to try it out but he will love it. Thanks for the opportunity to try it." 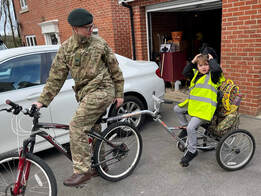 Kenzo and his Mum, Cez, collected our Berkshire based Mission tag-along trike in late February 2022. She told us at the end of March, "We’ve been using it on the daily commute." 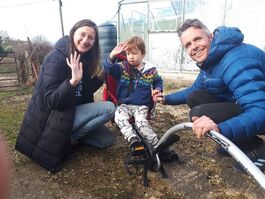 Chloe and her parents, Katie and David, collected one of our Gloucestershire based Weehoo tag-alongs in late February 2022. 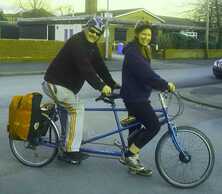 Nic collected our Manchester based Thorn Explorer tandem in mid-February 2022 and is its first Borrower.  He told our Facebook group in early March that the photo shows, "El and Nic borrowing this amazing tandem and finding new adventures to increase independence and fitness." 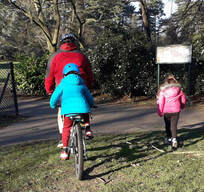 Arthur's Mum, Azi, collected our Hertfordshire based Ammaco Twin tandem in mid-February 2022.  She wrote at the start of March, "It is great and my son has done better than I though. He started practicing in the park, as he was nervous, but he had a ride back home on the road last weekend and loved it. I am so grateful for this opportunity and have recommended you to my locals (hope that is ok?) I heard my friend has requested one from you already."

Betty's Mum, Rhian, collected our Gloucestershire based Dawes Bobtail tag-along bike in mid-February 2022.  More details and a photo are to follow. 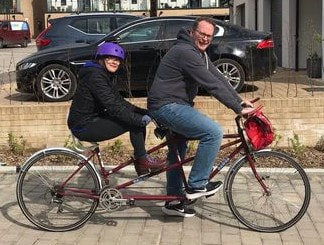 Rosie's Dad, Guy, collected our Gloucestershire based Dawes Back Street tandem in mid-February 2022.  They had previously donated a Pashley tag-along trike, which she had outgrown, and had been persuaded to try a tandem instead.  Guy said in mid-April, "It took us a few attempts on this very quiet cul de sac for Rosie to find her balance and work out what to do with her feet...but we got there! Looking forward to doing some sections of the Camel trail in a few week's time. Huge thanks to Charlotte's Tandems for the loan of this fabulous tandem"

Mark's Son in Law, Richard, collected our Berkshire based Duet wheelchair tandem in mid-February 2022.  More details and a photo are to follow. 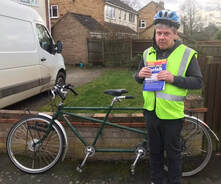 Norfolk and his Carer, Stuart, collected our Norfolk based Kurton tandem in early February 2022.  Stuart told our Facebook group, the same day, "Thank you Jenny, for all your help and guidance as William and I start a new adventure around Norfolk on the tandem". 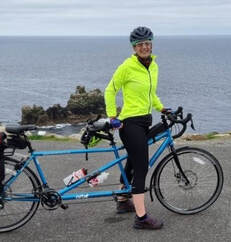 Matt and Jo collected our Manchester based Orbit Velocity tandem in early 2022.  Here is Jo at Lands End in early May 2022 at the start of their LEJoG.

Benjamin from Newcastle upon Tyne

Benjamin and his parents collected our Newcastle based Dawes Discovery tandem at the end of January 2022.  It is the third time that thy have borrowed a tandem from us.  More details and a photo are to follow. 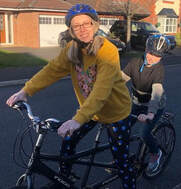 Henry's Mum, Annabel, collected our Liverpool based Indigo Turismo tandem at the end of January 2022.  Henry is its first Borrower.  She told our Facebook group at the end of March, "Making the most of the sunshine and taking our first ride out on the tandem. Will take some getting used to!"

Angelina and Ben collected our East Sussex based Helper Richard's Thorn tandem in mid-January 2022.  Ben wrote to Richard a few days later, "Just wanted to email to say our thanks again for lending us the bike! We have used it a few times now at the park and neighbourhood near us and it has been fantastic. Angelina has especially enjoyed discovering how it's like to cycle. We have been practising getting on and off at tight corners / those barriers to stop bicycles from speeding. We will practice it more before going on busier roads."  A photo is to follow. 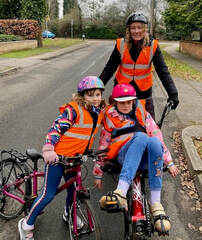 Rosie and her Mum, Terri, have had our Berkshire based Hase Pino tandem since mid-January 2022.  Terri wrote a week later, "Thank you for lending us the bike- we went for a first ride from home today and Rosie loved it! She was very calm and happy. We didn’t go too far- just up and down our street, but next weekend will try a longer ride. Please find attached a photo (Rosie’s little sister Clara wanted to be a part of the action)." 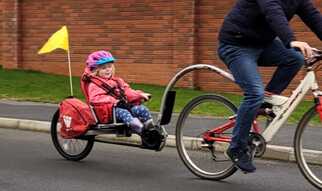 Penny and her parents collected one of our Gloucestershire based Weehoo tag-alongs in early January 2022.  Her Mum, Charlotte, told our Facebook group a week later, "Thank you for letting us borrow the Weehoo, Penny is absolutely loving it!! It's perfect for her needs (right hemi) now that she's outgrown her baby seat."