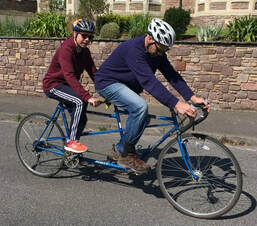 Thomas' parents and brothers collected our Gloucestershire based blue Orbit tandem at the end of March 2019.  His Mum wrote on our Facebook page the next week, "Thomas & Dad getting to grips with their tandem, newly borrowed from Charlotte’s Tandems, before going out on their first proper cycle together." 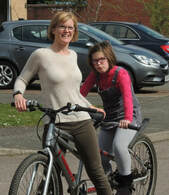 Anya and her Dad, Neil, collected one of our Yorkshire based KHS Sausage Dog tandems at the end of March 2019.  See a video of them in action on our Facebook group.

Debs collected our Surrey based Simmonsohn Stavanger tandem in mid-March 2019.  More details and a photo are to follow.

Liz and Russ collected one of our Oxford based Orbit tandems in mid-March 2019.  More details and a photo are to follow. 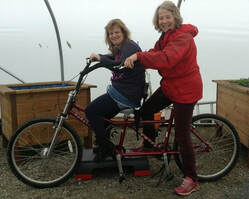 Megan's pilot, Gabriella, collected our Shropshire based BuddyBike in mid-March 2019.  Ray, our Shropshre Helper, wrote on our Facebook group, "Here's Megan, a student at The National Star College in Hereford, getting familiar with the Shropshire Buddy Bike. Taking her on rides will be her Physio GabrielLa. Gabriella says "we actually went cycling in the Forest of Dean yesterday and she pedalled a fixed wheel trike well. Hopefully we will get to cycle the tandem next week. Wish us luck!""

Oliver and his Dad, Diego, collected our Shropshire based Tag-along bike in mid-March 2019.  More details and a photo are to follow. 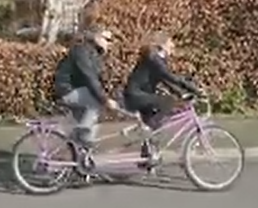 Brian, our Cheshire Helper wrote on our Facebook site in early March 2019, "Caroline and James came all the way from Southport to collect the very fetching Viking Pink Link tandem of the North Wales area. Here they are on their first ever ride and will be practising for a Triathlon in seven weeks: they will update us on how they do."  See a video of them in action on our Facebook site. 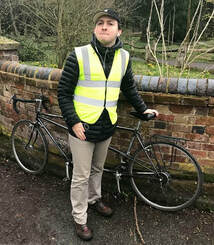 Our Shropshire based Dawes Galaxy tandem was collected at the end of February 2019 by Mark Taylor Support for William. 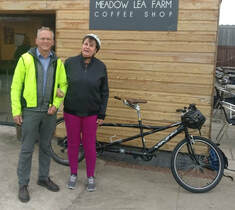 Anne and her pilot Ian collected our Cheshire based Viking Valhalla tandem in late February 2019 and wrote, "We went as far as the Meadow Lea Cafe in Mickle Trafford on the delightfully traffic-free Greenway. We managed to negotiate all but the narrowest of traffic-calming obstructions and we soon settled into a comfortable pedalling rhythm. Although we set out in dry weather it had started to drizzle by the time we returned but Anne is very robust about the prospect of getting wet occasionally and our spirits were not dampened. We have already planned another ride for next week!"

Nicky and his friend Tim collected our Cheshire based Viking Pink Link tandem in mid-February 2019.  Brian, our Cheshire Helper wrote on our Facebook site, "Vision Support Chester are a charity who refer V I folk to us. Nicky and his pilot Tim recently experienced something different in Amsterdam when they rode a tandem for the 1st time. They enjoyed it so much they came to collect our Cheshire Viking tandem in a rather fetching Pink."

Helen and her husband, James, collected our Cheshire based Burley Samba tandem in mid-February 2019.  More details and a photo are to follow. 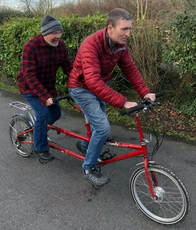 Rob and his friend, Mike, collected our Leicester based Bike Friday tandem in mid-February 2019.  Our Helper, Peter, wrote on Facebook, "This was their second ride after a interesting start on the first when Rob instinctively steered from the back. He hasn’t ridden on two wheels since his days in full time education. It is great to think that Charlotte’s Tandems enables him to start cycling again.The Bike Friday is a very comfortable ride and not in the least unwieldy. The small wheels and ability to separate the frame into two make it very practicable, too.  This tandem will be taken by car from Nottingham to the Tissington Trail at Ashbourne very soon!"

Steve collected our Devon based Dawes tandem in mid-February 2019.  More details and a photo are to follow. 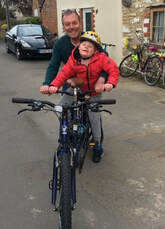 Henry and his Dad, Philip, collected our Oxford based Viking Timberwolf tandem in early February 2019. 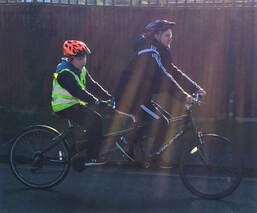 Reuben and his Mum, Claire, collected one of our Surrey based Viking tandems in early 2019.  In mid-February Claire wrote, "Just thought you might like to see some photos of Reuben doing his bikeability. He has had the most brilliant week with two amazing instructors from Surrey CC team. They finish today. Hopefully both he and his pilot - the lovely Mr G from school - will get their badges this afternoon!
We can’t thank you enough for the loan of the bike. It has given Roo such a boost and we can’t wait to now get out and cycle as a family for the first time in over 18 months! More photos to follow I am sure."

Toby from Much Wenlock 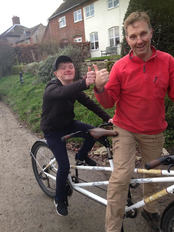 Toby and his Dad, Gary, have had our Shropshire based Viking Companion tandem since New Years Day 2019.  Gary wrote, "I have cycled with Ray (our Shropshire Helper) many times as a friend and he has always been trying to get my boy Toby to have a go on one of your tandems. Up until now Toby would not have been able to do this and has been reluctant to try. However Ray's persistence and patience has eventually paid off and we got Toby on the back. Needless to say he loved it!
What a great scheme!!! We will be sharing this with all of the groups the Toby is a involved with and hopefully spreading the word!"