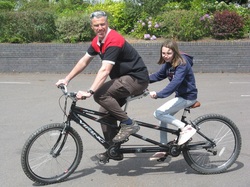 Grace and her Dad collected our Shropshire based Viking Valhalla tandem at the very end of May 2015.  Helper Ray says, "Grace looks forward to riding with her family around Lake Vyrnwy, which isn't too far away."  He later reported tht he Mum said, "We had a quick trial on Sunday as Grace was excited.  Then we went up to Lake Vyrnwy last night and had a really successful ride. The toe strap seems to be working!"

James and his Dad collected our Cheshire based Viking Pennine Trail at the very end of May 2015.  Helper Brian wrote on Facebook, "They set off to ride the 17 miles home (and made it) in preparation for a 60+ mile charity ride in June. James is only 8 but his dad runs marathons & cycles a lot. Gareth emailed, 'A great ride (home) and thanks again for the use of the bike'". 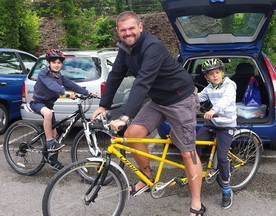 Alex and his Dad, Andy, collected our Gloucestershire based Orbit Gemini tandem at the end of May 2015.  Alex has since had his own tandem for his birthday.

Owen and his Dad, Paul, are the first borrowers of the West Midlands based Childback tandem.  They collected it at the end of May 2015 but returned it later to have a larger tandem from us. 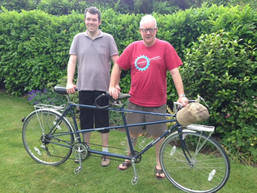 Dominic's Dad, Nick, collected our Surrey based Dawes Galaxy tandem at the end of May 2015. More details and a photo are to follow. 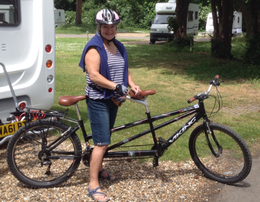 Lynne and her partner, John, collected our Plymouth based Viking Valhalla tandem at the end of May 2015.  She wrote in mid-June, "I just want to know that you have given me a new lease of life. We have just got back from Chertsy, we had wonderful rides along the Thames."

Tariq collected our Yorkshire based Dawes Discovery tandem in late May 2015.  He is going to be piloted by family and friends.  Find a video clip of him in action on our Facebook Group.  He wrote, "See the attached video clip of my son, the pilot, and me practicing in the park. It was a good session; three hours riding. I think still need more practice. He's only a young lad and don't want to give him too much responsibility too soon." 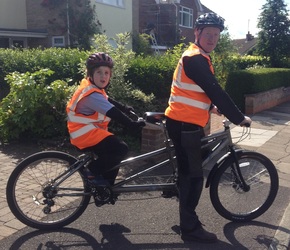 Connor's Dad, John, collected our Gloucestershire based Viking Saratoga tandem at the end of May 2015.  His Mum, Ellen wrote, "Connor has taken to the tandem so well, he pedals along with either John or myself. He was so desperate to ride a bike and the tandem has fulfilled that dream, his brother, Sean, is so happy because we can ride out as a family and go on long rides together. Thank you" 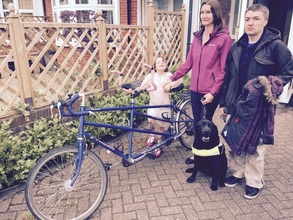 Claire and her family collected our London based Thorn Discovery tandem at the end of May 2015. She is going to ride it with her Dad. 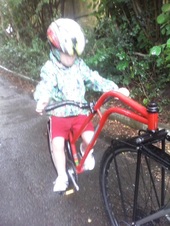 Josh and his Mum collected our Bath based tag-along at the end of May 2015.  Judith wrote on our Facebook group a month later, "There's something magical about my bike's new built in sound system that sings and laughs even when it's raining heavily! No longer is Josh restricted to studying my back from his child seat, and he is obviously inspired by the world he sees whizzing by. One day he might even turn those pedals... Thanks guys!"

Gary and his Carer, Rob, are the first borrowers of the Gloucestershire based Thorn Adventure tandem and collected it at the Spring Bank Holiday 2015.  He reported back about their Maiden voyage, "It went really well. We cycled along the track between Waitrose and Pitville in Cheltenham. He had no trouble cycling or balancing. A photo is to follow."  Unfortunately after that time, Gary refused to ride it. 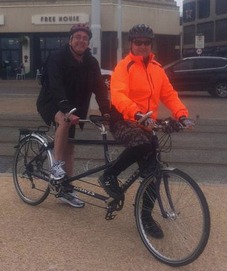 Luke and his friends collected our Lancashire based Dawes Kalantar tandem in mid-May 2015.  Here is is with his friend, Steve.  Another friend, Jenny, wrote, "We had a good ride down Blackpool Prom to Cleveleys & back" and that "Luke found it very exhilarating" 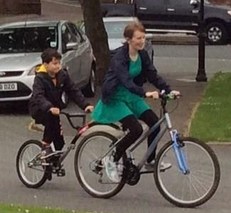 Georgi and his Carer, Carly, are the current borrowers of the Cheshire based Canyon tag-along and have had it since mid-May 2015.  Carly says that "We tried the bike tonight, he's a bit unsure but I'm sure he will get used to it! Thankyou!"

Keith collected our Shropshire based Buddy Bike in mid-May 2015 to use with his cycling groups in Telford.  He says that the children are really enjoying the BuddyBike and can not get enough of it.  There are also lots more photos of them using this tandem on our Facebook Group. 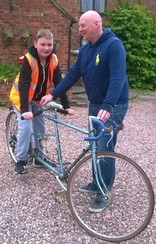 Harry and his Dad, Shaun, have had our West Midlands based Claud Butler tandem since mid-May 2015.  Our Helper Nigel, wrote on our Facebook Group "Harry is looking forward to some great bike rides around the local lanes with his family, who are already queuing up to take the front seat."

Anita collected our Cheshire based Columbia tandem in mid-May 2015.  Her sister, Michelle, also borrowed a tandem recently.  They and two friends are going to use both tandems on a sponsored cycle ride in mid-June.  More details and photos are to follow. 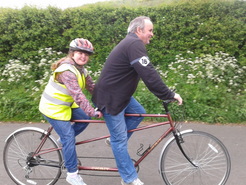 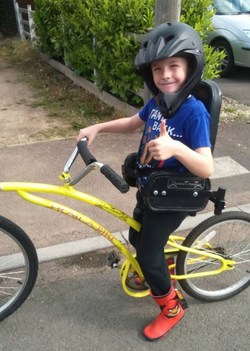 Josh and his Mum, Hayley, are the first borrowers of our Gloucestershire based Adams tag-along.  They collected it and a backrest with side supports in mid-May 2015.  Hayely wrote a week later on our Facebook Group, "This is my little man Josh enjoying the freedom of a bike ride.  Having one leg longer then the other and Spina Bifida, we never thought we would see the day when Josh would ride a bike due to his balance. We can't wait for half term so we can bike down to the river and enjoy some fish and chips." 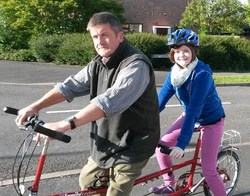 Alice and her Mum, Beverley, are the first borrowers of our Leicester based Bike Friday tandem.  They collected it in early May 2015.  She says that Alice "can not stop riding the tandem with her Dad".
On our Facebook Group she added, "Alice is very happy. Riding her bike was one of the things she missed the most after losing her sight. Dad is just thinking about how fast and how far Alice wants to go on the tandem! 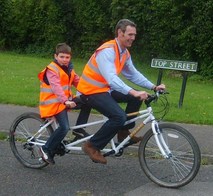 Oliver and his parents, Natalie and Adam, collected one of our Sussex based Viking Companion tandems in early May 2015.

Ammir and his Mum, Nadia, collected our Shropshire based Viking Companion tandem in early May 2015. 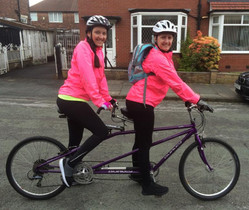 Michelle collected our Cheshire based Burley tandem in early May 2015.  Her sister, Anita, also borrowed a tandem recently.  They and two friends are going to use both tandems on a sponsored cycle ride in mid-June.  More details and photos are to follow. 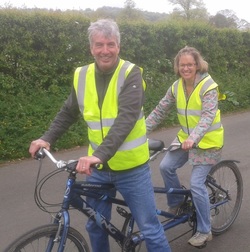 Judy and John collected one of our Gloucestershire based Viking Salerno tandems in early May 2015.  Judy has MS and she now is able to go on cycle rides with John again.  She has kept us updated on our Facebook Group.

Evie and her mum collected our Lancashire based Viking Derwent tandem at the start of May 2015.  Evie's Mum, Lisa, wrote on our Facebook Group in mid-June, "At last, thanks to Charlotte's Tandems, Evie can get involved in cycling with the family. Evie has never mastered cycling or really enjoyed her Pashley Add 1 as she has got older" and posted a video clip of her first ride on the Derwent.