Joni and her Mum, Tracy, collected our Glasgow based Viking Pennine Trail tandem at the end of July 2022.  More details and a photo are to follow.

Clare and her husband, James, collected our Berkshire based Mission tandem at the end of July 2002.  James told our Facebook group, "Thanks Charlotte's Tandems for allowing us to cycle together again."

Annike and her Mum, Marijke, collected our Berkshire based Timberline tandem in late July 2022.  In mid-September Marijke wrote,
"Thank you so much for organising this tandem with John for us. It has been a good adventure around Swindon and into the countryside this past month, and my camera shy daughter finally posed with the bike. It has been wonderful to see her big smile when we have been out and she said although she was not in control, once she relaxed, she said she was ultimately much less anxious and really enjoyed being able to chat, and just feeling the wind in our hair.
I think our next holiday needs to be a bike one, she doesn't enjoy the car, so sightseeing on a bike, maybe in the Netherlands would be good. I would never have known that this would be a possibility without this gift the past 6 weeks. Thank you so much." 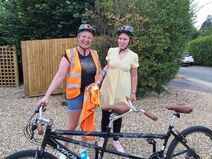 Louisha and her Mum, Tara, collected one of our Surrey based Viking Saratoga tandems in late-July 2022.  They previously borrowed one in 2015.

Riley and his Mum, Jenny, collected our Hampshire based Thorn Kiddyback tandem in late-July 2022.  Jenny wrote in early August, "We have been practising on the grass to begin with just so Riley can get used to it.  I will send more photos once we have done more rides out". 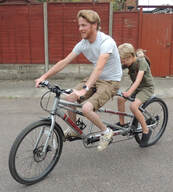 Keir and his parents tried out our Hertfordshire based Ammaco Twin tandem in late July 2022.  His Mum, Helen, told our Facebook group, "Keir is a natural! Anything that engages his sense of balance makes him so calm and focused. Thank you Steve!" 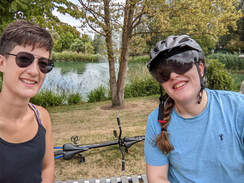 Charlotte and Naomi collected our Surrey based Simonshohn tandem in mid-July 2022.  Charlotte wrote the next day, "We managed to try out the tandem today and after a nervous start I was able to relax and have fun. It was only a short trip but I think it will be one of many!   Fortunately, Naomi is a confident rider already and she coped admirably with my uncertainty and lack of balance. Honestly, I think she had even more fun than I did, especially on the hills!  Thank you all for your hard work to make this happen!"  Naomi wrote, "We went out for a spin to test it out today! Need to tighten the rear handlebars a bit, but I think we found our way and had good communication. Next time we will try to go a bit further. Charlotte likes the helmet she got with a visor, which greatly reduces the light sensitivity, so now we just need a bit more time on the bike when I'm back from holiday :) We took this photo by the lake on campus.  Thanks for the lend! It's great fun! " 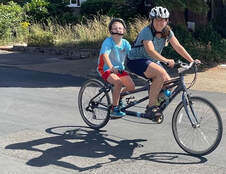 Daniel and his Mum, Leigh, collected our Surrey based Viking Salerno tandem in mid-July 2022.  Leigh told our Facebook group, "We are loving our tandem collected on Wednesday. After a couple of trips to the local park we have ventured further this afternoon stopping for an ice-cream at Hampton Court. Daniel provides a running commentary and often shout-outs to anyone we pass! I'm sure we're going to get out lots in the coming weeks so more photos to come... Thanks all at Charlotte's Tandems x" 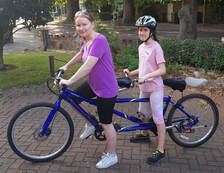 Eva and her Mum, Karen, collected our Surrey based Reflex Timberline tandem in mid-July 2022.  Karen wrote the next day, "I attach a picture of Eva and I on one of the fabulous tandems. Not bad for a girl who wasn't going on... we had our first small cycle by the river last night. This will make a huge difference to our summer.  A huge thank you to you and your wonderful team.  We really appreciate it." 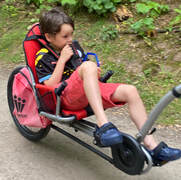 Cooper and his Mum, Katy, collected our South Staffordshire based Weehoo tag-along in mid-July 2022.  Katy wrote a couple of says later, "Thank you so much, although we have only so far managed a couple of short local rides, both Cooper and his sister are so far really enjoying their rides! It’s lots of fun: thank you so much, we will send you pics throughout the summer." 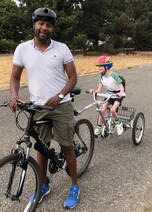 Archie and his Mum, Suzie, collected our Berkshire based Mission Piggyback tag-along trike in mid-July 2022.  They have previously borrowed our Berkshire based Hase Pino tandem.  Suzie told our Facebook group in early August, "Another day, another bike. This time we’ve borrowed a tag a long from John, the amazing helper in Berkshire. Archie’s off to find a park to play on!"

John and his friend, Martin, collected our Dorset based huge Cannondale tandem in mid-July 2022.  John wrote soon after, "Pilot Martin and I took our first test ride the other night.  There has been a fair amount of (reversible) 'fettling' but fortunately Martin is an experienced Tandem rider / mechanic and has a wealth of
spares to draw on apparently."

Ripley and her Mum, Liz's, friend, Esther, collected our Berkshire based Weehoo tag-along in early July 2022.  They are its first Borrowers.  Here is Ripley enjoying her 10 km ride along the River Cam. 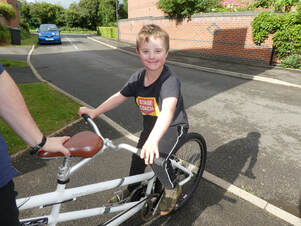 Oliver's Mum, Felicity, collected our South Staffordshire based Weehoo tag-along at the start of July 2022.  A few days later she wrote, "Thank you for arranging for me to collect the tandem for Oliver on Friday.  Despite an unpromising start weather wise on Saturday, we managed to get out on the tandem late on Saturday afternoon – to the absolute delight of this little boy!  We did loops of our village, passing the house several times in case of need to “bail” etc., but no…he loved it, held on, pedalled, and was delighted!  We are still hoping to do the Napton village Bike ride (in its 40th year) with Oliver on his tandem in two weekends’ time. We will work on wearing his helmet!!!"